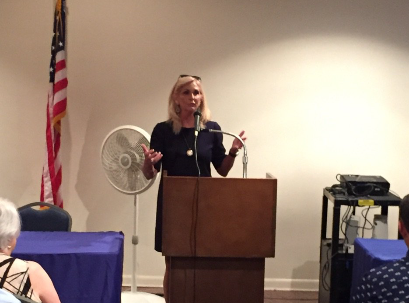 JACKSON, Miss. (Legal Newsline) – Plaintiffs lawyers continue to prop up a Mississippi Republican who would be able to give them lucrative contingency fee contracts should she be elected attorney general.

It’s not unusual for state attorneys general to reach such agreements with members of the trial bar, but those lawyers usually favor Democratic candidates. In Mississippi, current treasurer Lynn Fitch has been the recipient of the generosity of lawyers around the country.

After winning a Republican primary earlier this month (she still must face Andy Taggart in a runoff next week), lawyers at major firms like Labaton Sucharow and Levin Papantonio continued the trend detailed earlier in this Legal Newsline article.

According to a recently filed finance report, Fitch took in $170,000 in the weeks leading up to the primary and after it, much of it from the trial bar. She also spent $267,600 on advertising.

Firms that represent public pensions seem to be sweet on Fitch. Public pensions can be used as plaintiffs in lawsuits after the stock price of a company they’ve invested in drops.

Lawyers at Labaton Sucharow have given another $2,000 after the primary. They’d given at least $10,000 before it.

Two Pennsylvania firms this month have decided they have an interest in the race. Securities class action firm Kessler Topaz of Radnor has given $10,000, and Berger & Montague’s director of government relations gave $2,500.

And a political action committee called Consumer Advocacy gave $5,000. The PAC appears to be funded by the Philadelphia-based securities firm Barrack, Rodos & Bacine.

In addition to contributions from plaintiffs lawyers, lawyers at full-service firm Butler Snow gave $5,000 after the primary, bringing the firm’s total up to at least $14,000. They've also donated to Taggart.

Ben Gordon of Levin Papantonio, another plaintiffs firm with government clients, gave $3,333 after the primary.

Booted from the race after the primary was Mark Baker, who had promised to end the practice of handing out contingency fee contracts to private lawyers. The current AG, Jim Hood, has been active in that area, drawing the attention of critics of the practice. He’s now running for governor.

Fitch recently told Mississippi Today: “As you would in any law firm, you’ve got great in-house individuals, lawyers, you would certainly use … as your first base because it’s more efficient and effective. But as in any law firms, there will be times that you don’t have all the subject-matter experts in your firm so you will need to look to outside counsel to have some hired at the right times.”

The same filing from Taggart shows he raised $140,000 in the weeks before and after the primary, and some of his biggest supporters are:

The runoff election is Aug. 27. Baker is supporting Taggart.

A spokeswoman for Fitch said the fundraiser event with Starr was an opportunity for attendees to hear him speak about his service as Independent Counsel during an investigation of President Bill Clinton. Starr has released a book about the investigation. The event had nothing to do with the use of contingency-fee attorneys, the spokeswoman said