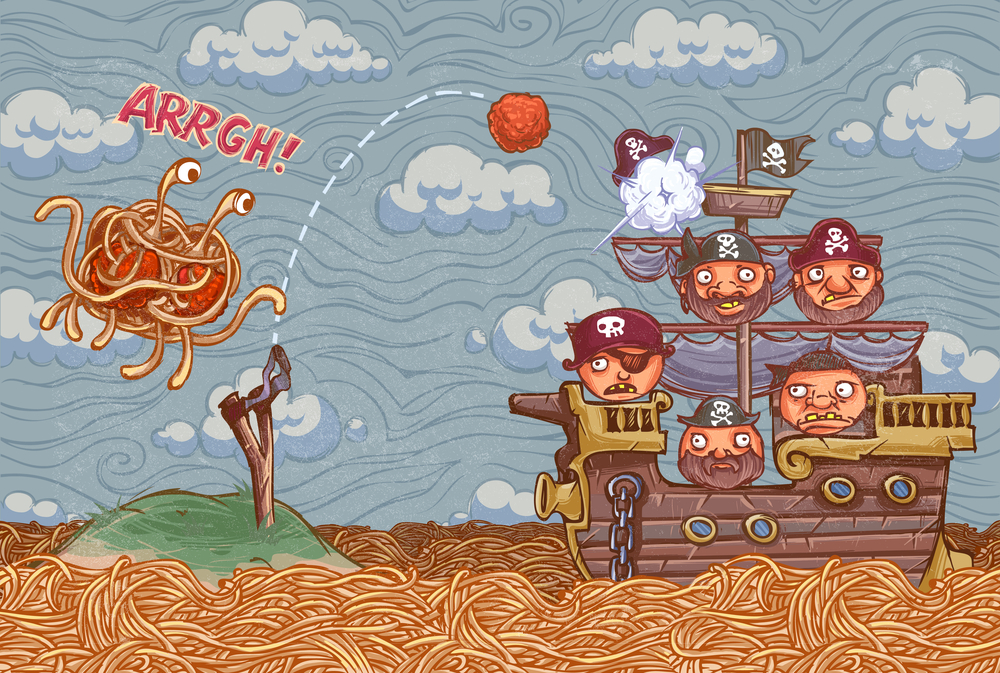 LINCOLN, Neb. (Legal Newsline) – People can worship a Flying Spaghetti Monster (FSM) if they so choose, but that doesn’t make FSMism a religion, a Nebraska federal judge ruled this year.

The decision stems from a 2014 lawsuit brought by Nebraska State Penitentiary prisoner Stephen Cavanaugh, who sought $5 million for "deep emotional, psychological and spiritual pain" resulting from the prison’s refusal to accommodate his “pastafarian” religious belief in the Flying Spaghetti Monster, otherwise known as “His Flying Noodliness.”

Cavanaugh complained the prison would not allow him to attire himself in "full pirate regalia," which is a tenet of FSM faith. Another tenet of FSM Gospel provides each Friday as a holiday, during which the devout take communion by eating pasta and drinking beer.

FSMism emerged as a religion following a satirical open letter written by Robert Henderson arguing against the Kansas State Board of Education’s decision to allow the teaching of intelligent design in public schools rather than evolution. The letter became an internet sensation. Taking the satire a step further, Henderson in 2006 published The Gospel of the Flying Spaghetti Monster.

Today, FSMism is said to have thousands of followers internationally and is a recognized religion in the Netherlands, New Zealand and Poland. The first legally recognized pastafarian wedding took place in April, the same month the Nebraska federal judge ruled it is not a religion.

In his decision, U.S. District Judge John Gerrard wrote, “It is, rather, a parody, intended to advance an argument about science, the evolution of life, and the place of religion in public education.”

“I think the judge did a very good job of recognizing that this particular ‘religion’ has been coming up more and more frequently, not only in the United States but in Europe and Canada, where this has been addressed,” Richard Meneghello, a labor lawyer and partner at the law firm Fisher Phillips in Portland, Ore., told Legal Newsline.

“In some places, they have found it to be a religion, similar to the way I think that some people call themselves a Jedi from the Star Wars vernacular.’”

He complimented the judge for examining the history of pastafarianism and realizing that FSMism was started as a spoof, a humorous tongue-in-cheek way to intellectually argue and test the theory of intelligent design. Henderson had evoked a flying spaghetti monster to argue that there is as much evidence of this fictional theistic pasta deity as the source of all creation as there is of a Judeo-Christian god.

“Just because FSMism has religious characteristics doesn’t make it a religion,” Meneghello said. “The judge might think that there might be other cases in the future -- whether they’re employment-related or prison-related or whatever -- involving people’s religious rights, and he wanted to provide a very good structure, laying out his rationale.

"To me, that was one of the benefits of this case.”

The judge’s decision is notable for employers, who are required under Title VII and other various state statutes to make reasonable accommodations for employees’ religious beliefs, Meneghello said.

“It’s very unusual for an employer to ever be engaging in the kind of questioning where it’s looking into whether or not something is or isn’t a religion," he said. "Most typically, when these things come up, where we’re looking at how to accommodate the person, it’s whether it’s an undo hardship – not whether their underlying belief is an actual religion."

If an employer suspects that an employee is attempting a bogus religious accommodation request, however, there is a general rule of thumb to follow.

“To be a religion, it can’t be a person’s sole belief system," Meneghello said. "It has to be something part of an organized practiced, but it’s just something that has to be recognized as universal and not just akin to them. There might be some people that just develop their own unique belief system and that’s not going to be able to qualify under federal or state laws for accommodation purposes."

But this rule of thumb will not necessarily satisfy federal Equal Employment Opportunity Commission (EEOC) standards.

“The way the EEOC looks at it is really broad," Meneghello said. "Any sort of moral or ethical belief – it can involve a god or not involve a god as to big-picture questions about what is right and wrong -- and as long as it can satisfy that very broad standard, the EEOC is going to call it a religion.

"There’s not a lot of case law out there about this, because it doesn’t come up too often. But when it does come up, the federal agency, the EEOC errors on the side of calling things a religion."

Though the judge’s ruling was limited solely to FSMism, his 16-page decision nonetheless provides a framework of reasoning and analysis for determining what is or is not a religion when it comes to unique belief systems.

“I would caution employers who are reading this not to think that this case sparks a more narrowing or tightening of the definition of religion when it comes to employment practice because it doesn’t,” Meneghello said. “This case doesn’t involve Title VII or any employment statute at all.”

With respect to any individual employer who might be dealing with an employee espousing FSMism, he said the ruling does provide some good ammunition to show this it is not a religion.

“But it certainly shouldn’t then be used as any sort of justification for denying somebody else’s other potentially unique practice, and there are many of them out there,” Meneghello said. “That’s what it shouldn’t be used for.”

Rather, the employer should focus on reasonable accommodation.

“If somebody comes to you says, ‘Hi, I worship now this new religion and one of the things it requires is I want to dress up like a pirate around the office and take every Friday off because it’s a holiday in my religion and be able to drink beer on that day,’ you could analyze each of those things as to whether they present an undue hardship to your work."

For example, if someone just wants Fridays off and it is easily accomplished through flex-time scheduling, he said, then why does it matter why they’re asking for it?

“Dressing like a pirate, for most employers, it’s silly and ridiculous and it’s not going to work with them. But, hey, maybe they work as a computer coder and they show up and they’re sitting behind a desk and it doesn’t really matter what they look like,” Meneghello said.

He added that he is not advocating that employers let their people dress like pirates and take off Fridays.

“What the employer should do rather than rejecting the accommodation request out of hand is approach it from the perspective of let’s assume that I’m going to go down the road and start potentially accommodating you. What specifically do you want accommodated and let’s see how that would work, because maybe that would solve the problem anyway without having to make what could be a difficult call,” he said.