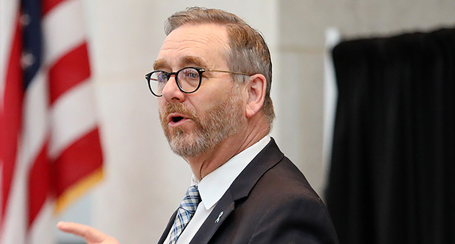 CINCINNATI (Legal Newsline) - Ohio Attorney General Dave Yost has asked a federal appeals court to halt or dismiss the first two bellwether trials in opioid multidistrict litigation, in a major escalation of the long-brewing fight between state AGs and cities/counties seeking their own share of opioid lawsuit proceeds.

In a mandamus petition filed Friday with the U.S. Court of Appeals for the Sixth Circuit, the attorney general says the trials scheduled to begin Oct. 21 “would fragment the State’s claims, pose a high risk of inconsistent verdicts, result in duplicative or overlapping damages and misallocate funds in the state.” Cuyahoga and Summit counties, home to the cities of Akron and Cleveland, are the first of some 2,000 cities and counties across the country to have their cases scheduled for trial in the Cleveland court of U.S. District Judge Dan Polster, who is overseeing the opioid MDL.

The Ohio AG’s filing represents the strongest response yet to concerns the federal MDL will hinder efforts to negotiate a global settlement with opioid manufacturers and distributors to pay for costs associated with the epidemic of addiction, crime and overdose deaths that expanded nationwide in the late 1990s and 2000s. The states have sued the industry in their own courts, while most of the municipal litigation has been sucked into the federal MDL. Judge Polster has no jurisdiction over lawsuits brought by state AGs.

“The counties advance claims that belong to the State in an effort to commandeer moneys that rightfully should be distributed across the state by Ohio,” the AG’s filing states. “Reworking the internal structure of a State is not the role of the Federal Courts.”

Private lawyers, led by the same firms that collected billions of dollars in fees from the $260 billion tobacco settlement in 1997, recruited thousands of cities and counties as plaintiffs against the opioid industry in hopes of negotiating a similar settlement and fees. But state AGs have voiced increasingly strident objections over what they believe is interference in their own efforts to negotiate a settlement.

Complicating the dispute is that many states are represented by lawyers on both sides, especially Motley Rice, the law firm that helped engineer the tobacco settlement and which now represents a number of states including Montana, New Hampshire, Rhode Island, South Carolina and Utah. Hagens Berman, also a leader in the tobacco settlement, represents a number of states, including Ohio.

Ohio first sued opioid manufacturers in Ross County in 2017. The state filed a second complaint against distributors in 2018 in Madison County.

Cuyahoga and Summit counties filed lawsuits a few months later but the complaints were swiftly removed to federal court. All the complaints “tell a similar story, and all assert nearly identical claims,” Yost’s filing states. But “counties and cities are mere creatures of statute,” the AG states, without sovereignty to sue on behalf of a state’s citizens.

Ohio said it filed its mandamus request with the Sixth Circuit because it isn’t a party to the litigation in Judge Polster’s court and doesn’t want to be. Mandamus requests are rarely granted but the Ohio AG argues this one is necessary because the county lawsuits threaten “Ohio’s sovereign interest in vindicating its citizens’ rights – all of its citizens’ rights – against the various defendants who fueled the opioid epidemic in Ohio.”

“The scheduled bellwether trial undermines all this because it lets political subdivisions act as representatives of the people’s interests—and thereby appropriate remedies that belong to the State,” the AG’s brief states.

The Sixth Circuit affirmed the Michigan Attorney General’s power to squelch a tobacco suit by Wayne County in a 2002 decision, saying when litigation involves a “state interest,” “the structure of the constitution requires an acknowledgment that, in this case and others where the state expresses its position on issues clearly of state interest, subdivisions are subordinate to the state's position.” Wayne County in that case was represented by Hagens Berman, which is outside counsel for Ohio in the opioid litigation, along with former Mississippi AG Michael Moore, Baron & Budd and local firms.

Ohio AG Yost said Judge Polster practically invited its mandamus plea when he said during a hearing earlier this month that if the state attorney general truly represents the people, “these cases should all be dismissed.”

“If that’s what you’re saying, you should say it overtly that the Court should dismiss—should have filed, you know, say these cases are not justiciable; cities and counties in Ohio don’t have a right to bring them, they should be dismissed,” the judge told an Ohio assistant AG at the hearing. The judge also described as “a problem” Ohio law requiring litigation proceeds to be deposited with the state treasury so the money can be distributed by the legislature.

“Of course, this policy choice is not a `problem’ a District Court can resolve,” the AG said.

The state is “a better plaintiff,” the AG said, since it can assert claims that offer fewer defenses for the industry and it doesn’t have to prove proximate cause, a hurdle Judge Polster recently made more difficult to get over with a ruling against some of the plaintiff expert witnesses.

Tension between the states and the municipal plaintiffs in the federal MDL has been escalating, as well as tensions between state legislators and AGs, who have in some cases hired political supporters as outside counsel in the opioid litigation.

Oklahoma legislators passed a statute requiring all opioid settlement money to be deposited with the state treasury after Republican AG Mike Hunter negotiated a $270 million settlement with Purdue that steered the cash directly to Oklahoma State University and his hired legal team. More recently, Kentucky’s Supreme Court ruled the governor and state legislators have the power to rescind contracts the AG signed with outside counsel.