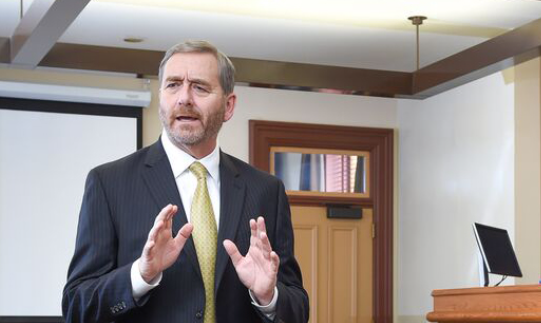 CLEVELAND (Legal Newsline) - Stepping forcefully into a debate that has been brewing since private lawyers first started recruiting local governments to sue the opioid industry, Ohio Attorney General Dave Yost and the National Association of Attorneys General have urged the federal judge overseeing multidistrict litigation to reject a proposed “negotiation class” consisting of every city and county in the country.

States have the sole authority to file parens patriae claims on behalf of their citizens and a federal court can’t interfere with how the states decide to divide their money, Yost wrote in a strongly worded, five-page letter filed with U.S. District Judge Dan Aaron Polster this week.

The Ohio AG went on to challenge the legitimacy of the strategy pursued by private plaintiff attorneys, some of them veterans of the 1997 settlement between the states and the tobacco industry, who have signed up thousands of individual cities and counties as clients to try to pressure opioid manufacturers and distributors into a multibillion-dollar settlement. Private lawyers reaped some $14 billion in fees from the $260 billion tobacco settlement.

Yost criticized “the self-admitted power grab being made by unelected private attorneys to control the distribution of public moneys within the States.”

“The proposed negotiating class, and perhaps this very litigation, threatens the sovereignty of the States like nothing else in recent history,” he wrote. “It seeks to represent not a single political subdivision asserting parens patriae standing, but all of them. In other words, this motion seeks to permit the class to stand in the shoes of the States — nothing short of usurpation.”

On July 9, a committee of private lawyers leading the multidistrict litigation renewed their request for Judge Polster to certify a class authorized to negotiate a global settlement. In that memorandum, the lawyers acknowledged the almost impossible challenge of crafting an agreement that brings closure to defendants while steering money fairly to more than 34,000 cities and counties nationwide.

To get there, they want the judge to approve a complex mechanism that largely replaces the political process within states with a formula steering money to cities and counties according to a matrix of indicators including population and number of opioid addicts.

The AG's association said any settlement class would intrude upon state sovereignty and impede their efforts to negotiate a global settlement. The practical effect of such a class "would be to allow political subdivisions within and outside of a State to hamstring the settlement of State enforcement actions," NAAG said.

The plaintiff lawyers, whose leaders include Joseph Rice of Motley Rice and Jayne Conroy of Simmons Hanly Conroy, say their proposal is necessary so cities and counties “can negotiate credibly and effectively, as a group seeking a common resolution.” Otherwise, they say, the MDL will “consume thousands of hours of judicial time and millions of dollars of party resources over years of continued litigation.”

The proposal represents a serious departure from existing class action law, however, blending in elements of asbestos bankruptcy law, where Rice and Conroy both have made extensive fortunes. The class would represent every city and county, regardless of whether they’ve sued, on an “opt-out” basis - meaning they would belong to the class unless they inform the court they want out. Any settlement amount would have to be approved by a 75% supermajority of the class, although class members could only object to the amount of money, not the prearranged method for distributing it.

Ohio AG Yost, a Republican elected in 2018, called the proposal a “travesty” and probably unconstitutional. Cities and counties are creatures of state statute, he said, and federal courts have no power to interfere in their relations with the state that established them. The proposed representatives to negotiate a settlement include big cities like San Francisco and Chicago but only a handful of small towns and counties and none from Ohio’s hard-hit southern region, he said.

“The federal republic is The United States of America, and not the United City-States of America or the United Counties of America,” he wrote. “50 State Attorney Generals are better representatives of the people of their state (and the smaller political subdivisions) than private attorneys hired by the 51 largely urban cities and counties from only 30 states.”

Yost also criticized the allocation mechanism the lawyers have proposed. According to an “Allocation Map” the lawyers have placed online, Coshocton County, Ohio, would get $1.99 per capita or a total of $73,265 out of a $1 billion settlement, after lawyers claimed $100 million in fees.

“Distributing a few thousand dollars to local communities is meaningless.”

The AG’s letter is the strongest denunciation yet of a proposal that immediately drew criticism from state attorneys general as encroaching on their ability to negotiate a national opioid settlement. Ohio was among 27 states, including Texas and California, that filed a letter in June asking Judge Polster to delay any decision on a class.

Political tensions flared in Oklahoma after that state’s Republican AG, Mike Hunter, negotiated a $270 million settlement with Purdue Pharma that steered most of the money to Oklahoma State University and rewarded private attorneys who were heavy contributors to his campaign with $59 million in fees. The Oklahoma legislature swiftly responded by passing a law requiring all future settlement money to flow to the state treasury first.