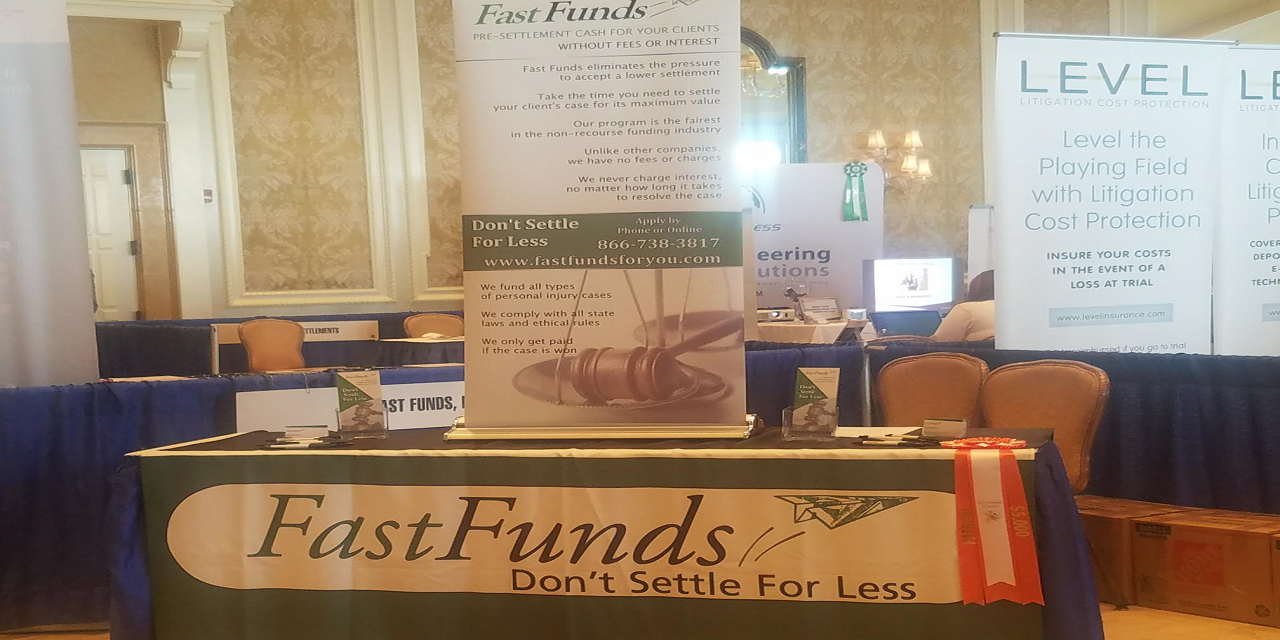 The Florida Justice Association's annual convention held June 19-22 attracted 41 vendors, including a group of "lawsuit lenders" - businesses that provide cash advances to plaintiffs in exchange for a percentage of any eventual settlement or recovery.

Jennifer Arend, marketing manager of Client Legal Funding, said that maintaining strong relationships with attorneys is a constant for the industry.

“We strive to have personal relationships with the attorneys because we don’t do any direct marketing to clients," Arend said. "Our clients are the attorneys. We want to have that one-on-one relationship with them so when something does happen and their clients fund with us or we fund their case, they can call us one-on-one and talk about the case with them."

In spite of the industry's growth, controversy persists, particularly as litigation lenders defend criticism that plaintiffs who receive funds are forced to pay exorbitant interest rates and administrative fees.

The industry doesn’t agree with identifying as lending companies, as the investments are not guaranteed to be paid back in the instance the attorney loses the case.

Members of the industry advise plaintiffs to seek other options such as borrowing from friends and family before signing a contract with them, as it should be treated as an emergency option, they say.

“It’s non-recourse so if they lose, we lose,” said Eileen Lagunas, SE field director of Oasis Financial. “A lot of this business is attorney relationship-driven because of the fact that our interest is much higher than a traditional bank. They’re exorbitantly higher and that’s why if you’re coming to us, it’s the worst-case scenario. I don’t pitch it otherwise or else I don’t feel right.”

In Florida, a man is challenging the structure of these agreements. Last year, he sued Certified Legal Funding, seeking relief under Florida's Deceptive and Unfair Trade Practices Act, the Consumer Finance Act and the Interest, Usury and Lending Practices Act.

The funding agreements between Taylor and CLF totaled $10,839.82 for two separate advances. According to Taylor’s complaint, CLF charged him 51 percent interest, a $600 processing fee and a $345 origination fee, which was charged every six months.

CLF has removed the case to Tampa federal court under the Class Action Fairness Act of 2005. It has also filed a motion to dismiss the case.

Taylor is seeking to represent a class of consumers from 24 states whose agreements, he says, are all governed by Florida law.

"The interest rates contracted for by CLF are in excess of those permitted to be charged pursuant to the CFA and the Usury Act," his complaint says. He has not responded yet to CLF's motion to dismiss.

Florida's neighbor to the north will soon decide the issue. Earlier this year, the Georgia Supreme Court agreed to hear the appeal of a Court of Appeals decision that said these agreements are not loans and not subject to usury laws.

Other regulatory developments include a settlement between the Colorado Attorney General's Office and two funders - Oasis and LawCash. Years ago, the AG's office determined the products were loans, leading to a court fight.

A South Carolina agency determined the same in 2014, and class actions similar to Taylor's have been filed by customers.

Arend says her company, Oasis, offers a more financially feasible option for those needing funding and striving to settle their cases.

“We’re immensely different from a lot of the other funding companies because our company will entertain reductions. What a lot of the other companies don’t understand is that if at the end of the case there is only X amount, there is no way to settle a case if no one is bending on that amount," she said.

There’s a link between personal injury cases and lawsuit lending companies, as plaintiffs who have allegedly endured life-altering injuries often need immediate financial assistance, as well as surgical funding. The industry has to deal with claims of companies taking advantage of people in desperate times, being that some companies operate with no cap on interest rates.

However, many of the companies present emphasized on being client-driven and providing options that serve everyone involved.

“We never over-fund a case. We want the plaintiff to walk away with money in their pocket when it’s all said and done,” said Bernard Lebs, regional sales manager of LawCash. “If we get a check for $3,000 and a plaintiff gets a check for $500, it’s kind of upside-down. These are non-recourse advances. They are not a loan. There are no payments being made on a monthly basis.

"The advances that we give are usually paid back to us at settlement. There are some cases that settle at what we don’t think it should have settled for. We may have to take a small reduction to help the plaintiff out as well. We do what we have to do to make the client happy and make it right.”