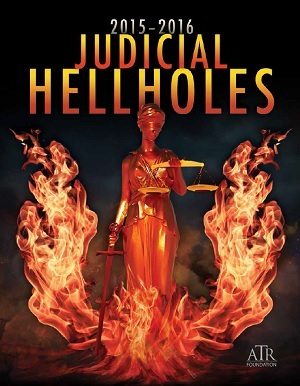 WASHINGTON (Legal Newsline) - California is the nation’s No. 1 “judicial hellhole,” according to a report issued by the American Tort Reform Association Thursday.

The state’s courts ranked as the “most unfair” in the nation in their handling of civil litigation, according to the tort reform group’s 2015-16 report.

According to the ATRA report, California is the “epicenter” for lawyers trolling to bring disability access lawsuits against small businesses and class action lawsuits against food and beverage companies.

“... A lengthy book could be written each year about the state’s irrepressibly plaintiff-friendly lawmakers and judges, and its often preposterous lawsuits and sometimes incredible court decisions that only encourage still more litigation,” the report states.

Maryann Maloney, a regional director of the California Citizens Against Lawsuit Abuse, said Thursday that state lawmakers better take note of the report, and realize the impact of the state’s lawsuit-happy environment.

“They really have to start paying attention to these lawsuits and what they’re doing to California businesses,” she said. “If we’re nothing but a target, they’re going to start looking for other states to do business in. Then, what does that mean for jobs here and our economy?

Maloney argues that a number of state laws have created a “windfall” for plaintiffs attorneys and others simply looking to abuse the laws for their own personal gain.

“There’s no enforcement,” she said of California’s disability laws, in particular. “It’s all about the money, not the access.

“Who really benefits from these lawsuits? It’s the plaintiffs lawyers, who are bringing the cases at everyone else’s expense.”

“It’s entirely lawyer-driven,” she said. “It’s all about money, not justice.”

“I can’t deny or disagree that we deserve it, though,” she said. “We have a number of different rules and laws that are very pro-plaintiff and that allow and even encourage meritless lawsuits.”

The only way things are going to change, Stone said, is for voters to care.

Right now, she said, state lawmakers have too many ties to trial lawyers.

“The problem is, trial lawyers here have more political power than organized business does,” Stone said.

The Consumer Attorneys of California had a much different perspective on the ATRA report, calling the tort reform group a “mouthpiece” for industry.

“There they go again. The tort war mouthpiece for the oil, tobacco and insurance industries is engaging in more silly season spin with its annual pseudo-study, which is nothing but distortions and propaganda from a few fading embers off the Fortune 500 list,” said Eric Bailey, communications director for CAOC.

“The reality is California has produced the bulk of the nation’s job growth since the Great Recession and is home to many of the planet’s leading industries -- from high-tech to Hollywood, from wine grapes to web-based transportation providers. It’s a place where corporations thrive and consumers still get a fair break.”

Bailey continued, “Our civil courts protect little kids from the lingering threat of lead paint and ensure justice for victims of asbestos poisoning. They provide a forum for folks injured by defective products or threatened by environmental degradation. They also allow businesses a way to resolve disputes over intellectual property and other matters that pit business versus business, which today is California’s fastest growing type of litigation.

“If that sort of high-functioning civil society is mischaracterized as a hellhole, give me a bag of marshmallows.”

California has been included in the ATRA report every year in some form since it was first issued in 2002. In addition to the current year, it ranked No. 1 in 2012 and 2013.

Some believed that the state’s civil courts would earn it a third straight No. 1 ranking in 2014.

But what ATRA describes as “monumentally egregious” corruption in the New York City Asbestos Litigation, or NYCAL -- which has since led to the related arrest and conviction of former New York State Assembly Speaker Sheldon Silver -- demanded that California be relegated to second place last year.

Since then, the pro-plaintiff judge who headed the New York asbestos court has retired and been replaced.

“... The Big Apple may begin to bob up from the bottom of the barrel,” this year’s report states.

“The new judge recently declined to put the city’s asbestos litigation on hold while the parties develop a more balanced process for handling the lawsuits, calling the system ‘not so rampantly unfair.’ Just mostly unfair -- given consolidation of trials, reintroduction of punitive damages, imposition of liability on one product manufacturer for the asbestos-containing parts attached by another, application of unwarranted joint liability, and the flipping of the burden of proof onto defendants.”

Meanwhile, Florida’s high court “continually expands” the liability exposure of those who live and do business there, according to the ATRA report.

The state’s plaintiffs’ bar is aggressive in its recruitment of clients and is politically influential, the report notes.

Missouri isn’t far behind, now often referred to as the “Show Me Your Lawsuits State.”

“Missouri’s reputation for a judicial nominating process controlled by the plaintiffs’ bar, an outlier high court willing to strike down civil justice reforms, and a lax standard for admission of expert testimony continue to discourage private investment in the state’s economy and help earn a No. 4 Judicial Hellholes ranking,” ATRA President Tiger Joyce said in a statement.

“Lawsuits in St. Louis are of particular concern, as plaintiffs’ lawyers enjoy excessive damage awards there and plenty of hospitable for those with asbestos lawsuits.”

But Joyce said no jurisdiction in the country is any more “hospitable” to asbestos plaintiffs than Madison County, just across the river.

“Never mind that the overwhelming majority of asbestos cases there have no connection to the county or even the rest of the state, defendants’ motions to escape the plaintiff-favoring jurisdiction are continually denied and large numbers of trials may be scheduled for a single day, further eroding defendants’ rights to due process and ratcheting up pressure to settle claims out of court,” he said.

Coming in behind Madison County: Louisiana, at No. 6; Hidalgo County, Texas, at No. 7; Newport News, Virginia, at No. 8; and the U.S. District Court for the Eastern District of Texas, at No. 9.

The ATRA report also calls attention to four additional jurisdictions that “bear watching” due to their histories of abusive litigation or “troubling developments.”

The report also includes a number of Dishonorable Mentions, which typically recognize poorly reasoned court decisions. This year’s include the supreme courts of Colorado, Indiana, Nevada, New Hampshire and South Carolina; an appellate court in Maryland; and a trial court in Tennessee.

However, the report does highlight some “good news” in its Points of Light section.

“Points of Light are examples of, among other things, fair and balanced judicial decisions that adhere to the rule of law and respect the policy-making authority of the legislative and executive branches,” ATRA states.

“This year’s good news comes from no-nonsense courts in Kentucky and Ohio, and legislatures in Indiana, Missouri and Ohio,” Joyce said.

Notable reforms included greater transparency between the tort and trust fund systems for asbestos claims in Arizona, Texas and West Virginia; good-government safeguards when the state hires outside lawyers in Arkansas, Nevada, Ohio and Utah; and protections against expansions of property owner liability to trespassers in Nevada, South Carolina and Wyoming.

The report explains that MDLs can be an efficient mechanism for managing mass torts, but notes that plaintiffs’ lawyers’ misleading advertising has inflated dockets and increased pressure on judges to push settlements, even in meritless cases.

The tort reform group contends the three areas have the potential to alter the direction of state law -- for better or worse.

To view the full text of the report, click here.

The annual Judicial Hellholes report compiles the most significant court rulings and legislative actions over the course of the year as documented in real-time online.

The report also reflects feedback gathered from ATRA members and other firsthand sources.

The Judicial Hellholes program considers only civil litigation; it does not reflect in any way on the criminal justice system.