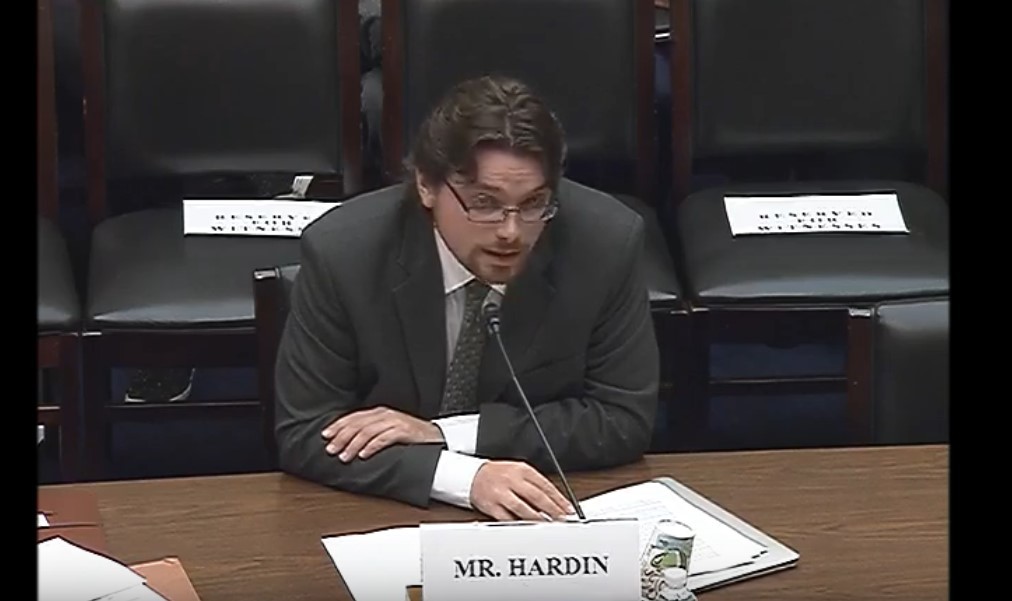 WASHINGTON (Legal Newsline) - Collaboration between private attorneys and law enforcement in environmental litigation is perverting the justice system, said a witness at today's House Subcommittee on Environment hearing, and if a Democratically-controlled Congress chooses to normalize it today - someday conservative interests this body doesn't favor will use the same tactic.

Green County, Va. prosecuting attorney Matthew Hardin, who for three years as a private attorney litigated freedom of information lawsuits over records between private attorneys and public office holders, described the targeting of private companies by state attorneys general, grand juries and local prosecutors who use subpoena power to investigate, at the urging of the tort bar and activists. He said that because of the players and agenda involved, many in the media and constitutional watchdog groups have chosen to "avert their gaze" on what otherwise might be seen as a national scandal.

He said that many of the records he obtained through litigation detailed successful campaigns by plaintiff attorneys to recruit sympathetic state attorneys general, which were then followed by a coordinated effort of political donors with assistance of activists - seeking to go after "climate denialism" - in support of private agendas.

"I'm calling on this committee to let the justice system work the way it is intended to. Try civil cases in civil court. Get prosecutors back in the business of prosecuting crimes, and the Congress and this committee focusing on its Article 1 responsibilities," Hardin said.

Today's hearing was the third this year on the topic of polyfluoralkyl (PFAS) and was expected to be a platform for manufacturers 3M, DuPont and Chemours to address mounting calls among activists and politicians for litigation and regulation, and to present evidence that the group of chemicals don't cause adverse human health effects - in stark contrast to testimony at the first two hearings.

But, last minute changes to the witness lineup included attorney Rob Bilott, partner at Taft Stettinius & Hollister in Cincinnati, who is pursuing a nationwide class action on behalf of anyone with detectable PFAS in their bodies, and former Minnesota attorney general Lori Swanson, who settled a suit against 3M last year for $850 million, of which the outside firm Covington & Burling received $125 million in fees.

Bilot, who will try a PFAS case in November, said he has spent the last 20 years in litigation and that he was at the hearing because of the national health threat the chemicals pose.

Swanson, who settled claims with 3M on the day trial was to begin, said settlement funds are to

PFAS are a group of chemicals that are used in products such as waterproof clothing, non-stick cookware and fire-fighting foam. They are now found in groundwater and human and dubbed “forever chemicals” because they don’t leave the human body.

Litigation is on the rise, as plaintiff lawyers recruit states and cities as clients to sue over water contamination. New York and New Jersey have sued 3M and other companies over PFAS emissions from firefighting foam. Michigan also is considering litigation.

The Democrat-led House has backed a measure to classify PFAS as hazardous substances under the Superfund law. It did this while the EPA considers creating a toxicity level – it has already issued an advisory for water systems with more than 70 parts per trillion to notify their state regulators.

The Environmental Protection Agency has decided more research is needed before a toxicity level is determined; but some members of Congress want them to be declared “hazardous substances” under the Superfund law, which would create more defendants for plaintiffs lawyers to target with lawsuits.

Rutherford said that 3M has studied the potential impacts of PFAS, including compounds that were phased out in 2002 - PFOS and PFOA.

"Importantly, the weight of scientific evidence has not established that PFOS, PFOA, or other PFAS cause adverse human health effects," she said. "Public health agencies and independent science review panels, while acknowledging certain possible associations, agree with that basic fact."

She also said workers exposed to the compounds that were phased out in 2002 (PFOS and PFOA), were studied in 2010 and 2016. Concentrations in the blood of those workers taken together, "do not show adverse health effects."