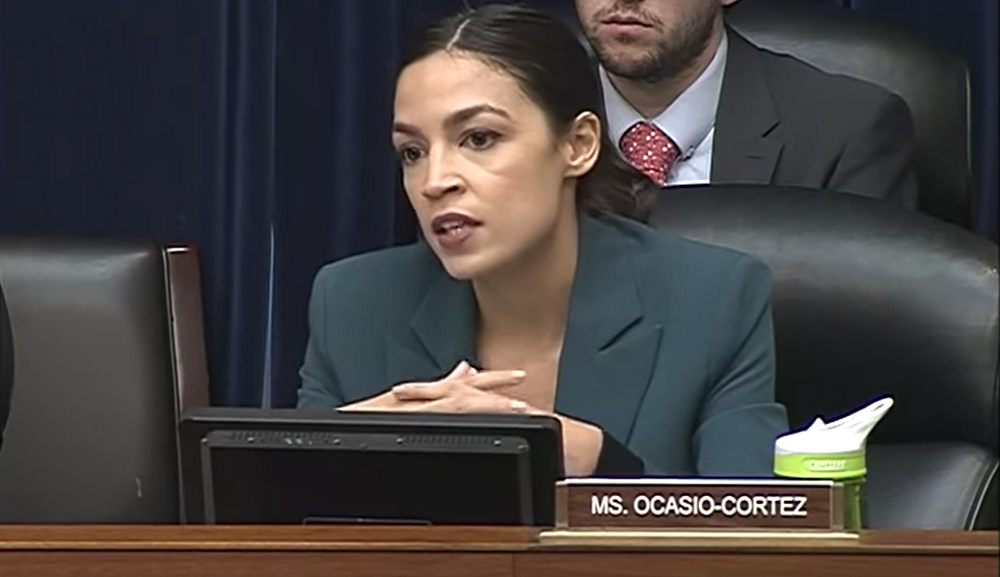 Alexandria Ocasio-Cortez, during a House subcommittee hearing on PFAS

WASHINGTON (Legal Newsline) – As Congress vilifies chemicals known as PFAS, some question whether the research upon which lawmakers – and trial lawyers – are relying shows that anyone has actually been harmed by them.

At the same time, law firms that spent big on Democrats’ push to reclaim majorities in the House (successful) and Senate (not) in the 2018 election stand to gain from the public shaming of PFAS as they pursue their lawsuits.

One of those lawsuits purports to be a class action on behalf of the entire country that has not been made sick.

It claims PFAS are in 99% of the population. However, it does not allege that the lead plaintiff – or anyone else - has contracted a disease as a result. Other lawsuits rely on claims for loss of property value.

“My general feeling is this whole PFAS scare is way overblown,” says Steve Milloy, a biostatistician who served on President Trump’s transition team for the Environmental Protection Agency and has made a career of resisting what he feels is “junk science.”

“It’s all basically running on the notion that detection is toxicity and if you can find it someplace and find people who were exposed to it, that’s bad.”

The new House Environment Subcommittee met last week for a hearing on PFAS, which can be found on nonstick cookware, waterproof clothing and firefighting foam, among other items. The meeting was apparently spurred by a recent EPA announcement regarding an “action plan” on PFAS that called for more research before regulation.

The EPA says it is in the process of determining the maximum allowable level for PFAS in drinking water. In 2016, it released non-binding advisory levels, but the Centers for Disease Control thought they were too high.

“I have looked at the human studies and none of those studies link PFAS to anything – it’s all just junk,” Milloy said.

“The companies are just hoping they won’t get tarred too much and whatever their shareholders have to pay, that’s OK, because that’s what they have to do. They can just blame past management.”

It’s a cause that has gained bipartisan support.

“For a politician, it’s easy grandstanding,” Milloy said. “It’s a bipartisan issue. No one wants to be associated with chemicals and since the industry’s not going to defend itself, it’s virtue-signaling for these guys.”

Rep. Brian Fitzpatrick, R-PA, is the co-chair of PFAS task force and spoke at the hearing to warn of thyroid disease, kidney cancer and developmental problems.

This month, members of the House and Senate introduced legislation that would require the EPA to declare PFAS as hazardous substances. This week, New Mexico Attorney General Hector Balderas sued the U.S. Air Force, alleging PFAS in groundwater around a base.

New Mexico’s AG office is one of 10 that took free help in the form of an environmental prosecutor paid for by the NYU School of Law through a $6-million grant from Bloomberg Philanthropies.

Environment Subcommittee Chair Harley Rouda decried the Department of Defense’s use of products containing PFAS, blaming exposure for the deaths and illnesses of servicemembers and their families.

The proposed legislation would affect more than 3,000 chemicals classified as PFAS. The National Association of Clean Water Agencies issued a statement that warns doing so could create liability concerns for materials that have trace amounts of PFAS.

In December, Atlanta attorney Daniel Grucza of Hunton Andrews similarly urged caution, saying the science is in “an early stage of development.”

“While the call to act in the face of uncertainty is understandable, action in the face of known uncertainties presents the risk of imposing enormous cleanup costs with little or no benefit to human health,” he wrote.

“If PFAS regulations are to be based on sound science and not speculation, it is important to consider approaches that allow for risk management while the science catches up.”

The majority of states don't allow such claims.

By 2012 and after studying more than 30,000 participants, the science panel said there was a probable link to six diseases.

“That’s what this is all about – the trial lawyers,” Milloy said. “There aren’t any victims, so how can there be plaintiffs?

“In the old days, you’d sue the railroad; now you sue the chemical companies. And they’re not smart enough to defend themselves.”

Chicago-area chemist Rich Trzupek told Legal Newsline that lawyers are hoping to turn PFAS into the next mesothelioma, a reference to a fatal cancer caused by asbestos. Litigation over asbestos has been called the longest-running mass tort in America.

“They’re trying to draw a direct line to this particular chemical, as usual,” Trzupek said.

Many PFAS lawsuits have been filed in recent years against companies like 3M, with some of the most prominent plaintiffs firms involved. Late last year, nine were stayed pending a ruling on whether they’d be consolidated with 75 lawsuits against TycoFire Products and Chemguard over chemicals found in fire-fighting foam (they weren’t), and defendants recently filed a round of motions to dismiss in one the highest-profile cases.

A relatively large group of firms are involved in those nine cases, which are filed in Alabama, Michigan, New York and Minnesota, 3M’s home state.

Three prominent firms are working together on class actions in Michigan against 3M, Wolverine WorldWide and Waste Management. They are the Miller Law Firm, Weitz & Luxenberg and Robbins Geller.

Employees at each opened their checkbooks for Democrat causes in the 2018 elections (Arthur Luxenberg also gave $13,500 to a conservative group that April).

Defendants’ initial strategies against these claims is to argue they were filed in the wrong jurisdiction, though DuPont is also alleging a lack of specificity in the lawsuit of an Ohio man who says blood-testing confirms he has been exposed to PFAS.

“Hardwick does not identify any product that (DuPont and Chemours) made or sold (or any operation they conducted) in Ohio that was a source of his alleged PFAS exposure,” a Feb. 14 motion to dismiss says.

Defendants in that case are not facing claims that PFAS caused any illness, only that the chemicals are in 99% of the population of the United States. The lawyers are asking to represent a class of everyone who has a detectable level of PFAS in his or her blood.

Instead of seeking damages for any specific health problems, they seek damages for battery, as well as negligence and conspiracy. The lawyers are Taft Stettinius of Columbus, OH, and Levin Papantonio of Florida.

Attorneys at Levin Papantonio also donated to the Democrat cause in 2018, mostly through the lobbying wing of trial lawyers, the American Association for Justice.

Milloy expects the companies to reach settlements that will leave the plaintiffs lawyers with tens of millions of dollars while hiding from the Congressional spotlight.

“When this started, companies defended themselves,” he said. “Now they really don’t.

“The price we all play is that we lose technology and the science takes a hit because it was never defended. The fundamental principle of toxicology is the dose makes it poisonous. Just because PFAS are in water or bodies doesn’t mean it has any effect.”