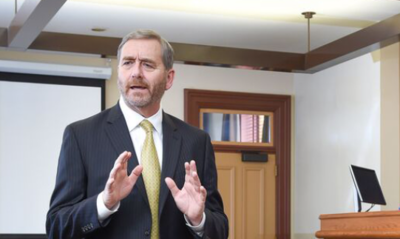 Seeking to halt bellwether trials set to begin in October on claims of two Ohio counties, Cuyahoga and Summit, Yost argues that states have the sole authority to file suit on behalf of their citizens and a federal court can’t interfere with how the states decide to divide their money. He also challenges the "power grab" of un-elected attorneys to control the distribution of public funds

Filed at the U.S. Court of Appeals for the Sixth Circuit on Friday, the Chamber's brief says that not only would the class interfere with the state's primary sovereign role to represent and protect the interests of its citizens, it would also threaten the "effective administration of justice by causing, among other things, staggering and unnecessary litigation costs, delayed and incomplete settlements, and a redirection of compensation from those who may have suffered injury from the conduct."

The brief echoes a strongly worded letter Yost wrote in July to District Judge Dan Aaron Polster, who oversees the MDL at the Northern District of Ohio.

"The plethora of lawsuits peddled by a vexatious plaintiffs’ bar to the country’s 40,000-odd municipal entities is not a serious attempt to solve the problem," the brief states. "It is an  attempt by hundreds of plaintiffs’ law firms to enrich themselves at the expense of more efficient and effective approaches."

Legal Newsline is owned by the U.S. Chamber Institute for Legal Reform (ILR).

Lisa Rickard, president of the ILR, said in a statement that a more appropriate way to resolve opioid litigation is with 50 state attorneys general, rather than the tens of thousands lawsuits brought by cities and counties.

“Plaintiffs’ lawyers have promised massive settlements to communities hurting from the crisis, but these promises often ring hollow because of the sheer number of lawsuits. Any process that includes hundreds of plaintiffs’ lawyers representing thousands of cities and counties means the money must first be divided among all the lawyers, leaving far less for any victims.”

Nessel's brief makes similar points in support of Ohio’s efforts to prevent the trials to proceed against Purdue Pharma, arguing that the state, not its subordinate local governments, is the sovereign to represent the interests that affect the entire state. Second, any awards that arise from parties responsible for creating the opioid crisis should be managed by the state to ensure a fair and effective distribution of resources.

Ohio Office of the Attorney General • U.S. Chamber of Commerce