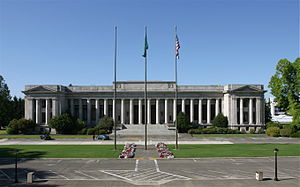 OLYMPIA, Wash. (Legal Newsline) - Washington's Workers' Compensation law, known as the Industrial Insurance Act, is under fire over a mesothelioma victims' lawsuit alleging The Boeing Company "deliberately intended" to harm him because it knew of the dangers involved with asbestos in the work environment.

In the case at hand, claimant Gary Walston worked at The Boeing Company's hammer shop in Seattle from 1956 until 1992, where he fabricated metal airplane parts. While he claims he worked with and around asbestos-containing products throughout his career, there was a time period in 1985 where crews were repairing pipe insulation containing asbestos directly above Walston's work station.

The hammer shop workers allegedly requested protection but were told to return to work but try to avoid working directly under the overhead repairs as dust and debris fell on the workers below.

Walston was diagnosed with mesothelioma in 2010. He and his wife filed suit against his employer. Boeing moved for summary judgment dismissing Walston's claims, arguing employer immunity under the exclusivity provisions of the IIA.

The trial court denied Boeing's motion, stating summary judgment should only be granted "if it can be said that there is no genuine issue as to any material fact, that all reasonable persons could reach only one conclusion, and that the moving party is entitled to judgment as a matter of law."

The case went to the Court of Appeals, Division II, which reversed the trial court and dismissed Walston's suit against Boeing on Jan. 29, 2013.

Walston was granted discretionary review and moved to transfer the case to the Washington Supreme Court.

Walston filed a supplemental brief in August arguing employers should be held accountable for deliberate intention when the employee can prove that the defendant knowingly and deliberately forced the plaintiff to "suffer a toxic insult" over the employee's objection, specifically when the parties involved are aware of the potential dangers involved.

"Boeing deliberately intended to force Walston to inhale asbestos and to produce lung injuries," the supplemental brief stated, "which is the only way to produce mesothelioma."

Walston now seeks to include asymptomatic subcellular changes to the list of compensable injuries, under the idea that an injury can be defined as an employer's knowledge that workers are exposed to harmful substances that could have negative effects on the body.

"Since exposure to asbestos was not certain to lead petitioner to develop mesothelioma, petitioner creatively alleges that respondent Boeing's 'toxic insult' was certain to begin an 'invisible injurious process' of 'undetectable' subcellular changes," Walston's brief states.

In an amicus brief filed Jan. 10, a group of reformers requests the Washington Supreme Court to reaffirm the strict interpretation of the IIA, specifically in reference to the "deliberate intent" phrase.

"The IIA created a swift and certain no-fault workers' compensation system for injured employees in exchange for granting employers immunity from lawsuits arising from occupational injuries," the brief stated. "The system reduces costs and fosters predictability.

"An expansive interpretation of that IIA's narrow 'deliberate intent' exception would violate the legislative intent embodied in the IIA and lead to litigation that the legislature sought to avoid."

However, the amici curiae argue that a manufacturer "has no duty under common law products liability or negligence principles to warn of the dangers of exposure to asbestos in products it did not manufacture and for which the manufacturer was not in the chain of distribution."

They say that the 60 trusts, operating a $36.8 billion privately-funded asbestos compensation system, is the proper source for compensation. Furthermore, altering the Workers' Compensation law is not the answer to securing adequate rewards for asbestos-related illnesses, they claim.

The group presented the amicus brief questioning whether an employer could be held liable in a tort for "post-exposure asymptomatic subcellular changes that merely reflect an increased risk of disease" if the tort is viewed under a narrow "deliberate intention" to injure exception to the IIA.

According to the IIA, disregard of occupational risks is not sufficient to meet the requirements of "deliberate intent" to injure, the group argues.

However, in Walston's supplemental brief, he claims that "individual sensitivities to a toxic insult will always render uncertain predicting whether someone will get a disease."

The amici argues that the petitioners want compensation for injuries resulting from exposures that were not known to be hazardous at the time, as well as pursuit of an asbestos lawsuit with pain and suffering if they are able to prove fault.

"The worker wins in both situations," the brief stated. "What does the employer receive in return? No immunity."

The amici argue that petitioners and plaintiffs in asbestos tort cases "seek to erode, if not eviscerate" the IIA's exclusive remedy rule, which could open the floodgates for future "toxic" tort cases against employers

Ultimately, the amici implores the court to reverse its order and grant Boeing summary judgment. Boeing satisfied its burden to show that no disputed material facts existed, which shifted the burden to Walston to prove that Boeing had actual knowledge that an injury would occur, they argue.

The Washington Supreme Court scheduled a hearing on the issue for Feb. 13, 2014.