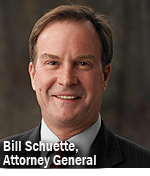 Two utility companies that have requested electric rate increases in Michigan might not get what they're looking for, as Attorney General Bill Schuette has asked the Michigan Public Service Commission to deny the rate hikes.

"Michigan families have enough rising costs to worry about this winter without being concerned about their electric company increasing their rates by up to 28 percent," Schuette said.  "I am intervening to ask the MPSC to closely examine these requests."

Schuette recently challenged a merger request by two other Upper Peninsula utility companies, which would also increase costs to consumers.

"In addition to the costs that may be imposed on U.P. electricity users by (the Federal Energy Regulatory Commission), it is unconscionable for these two companies to seek approval to impose even more costs on these ratepayers," Schuette said.

Want to get notified whenever we write about Michigan Office of the Attorney General ?

Sign-up Next time we write about Michigan Office of the Attorney General, we'll email you a link to the story. You may edit your settings or unsubscribe at any time.

Michigan Office of the Attorney General