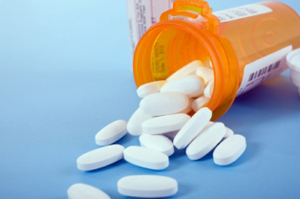 An example of aprescribed opioid | Courtesy of the FDA

WASHINGTON (Legal Newsline) - The Drug Enforcement Administration has slashed oxycodone production quotas by almost 60% from the peak in 2013, including a 9% cut for this year, demonstrating the government’s firm control over narcotics distribution even as plaintiffs in opioid litigation blame pharmacies and drug distributors for causing addiction and overdose deaths by selling too many pills.

Pharmacy defendants, believed to be the deepest pockets in the multibillion-dollar opioid litigation, face a trial next month in New York and a pair of bellwether trials in federal multidistrict litigation in Ohio this fall over claims they filled too many prescriptions for oxycodone, fentanyl and other narcotics. In vigorous pretrial jousting, they have sought reams of information from state and federal drug regulators to show the government was ultimately responsible for determining how many doses to sell and whether they were being diverted for illegal use.

In New York, opioid defendants have asked Suffolk County Justice Jerry Garguilo to postpone a scheduled March 20 trial date because the state has dragged its feet on turning over evidence showing how it approved sales by pharmacies and distributors and how it conducted its own surveillance of the market for diversion and abuse.

Defendants also have protested the state’s late submission of a report by former DEA diversion investigator James Rafalski, who worked under Joe Rannazzisi  - the man who presided over a tripling of oxycodone and hydrocodone quotas from 2005 to 2015 and now is working as a $500-an-hour expert for plaintiffs.

The DEA’s role in expanding distribution of opioid painkillers will likely be a central element of any defense in upcoming trials. Plaintiffs including cities, counties and states argue opioid producers and distributors created a “public nuisance” by convincing doctors to prescribe too many pills and failing to halt sales to patients who presented “red flags” of abuse or diversion.

Defendants say they sold as many pills as the government allowed and only pursuant to prescriptions written by licensed caregivers.

The ultimate number of doses released on the U.S. market is determined each year by the DEA under statutes requiring it to set quotas to meet legitimate medical needs. The government attempts to estimate diversion of frequently abused drugs and apply those numbers to quotas, but the DEA pushed back against state attorneys general who wanted the agency to reduce quotas even more to account for “overprescribing” by physicians.

“DEA does not control the quantity of a substance prescribed to a patient, and DEA cannot control how much of the prescription a patient decides to consume,” the agency said in response to comments by the states.

Sales of opioid painkillers rose from about 50 billion morphine-equivalent doses in 1992 to a peak of almost 250 billion in 2010. The DEA increased oxycodone quotas until 2013, then began cutting dramatically until they are now less than half that level. During the public notice period before enforcing this year’s quotas, some physician and patient groups complained the supply has been cut too much, causing shortages of painkillers including fentanyl used to treat patients with terminal cancer and other conditions.

Tens of billions of dollars hang on who is ultimately found responsible for causing the opioid crisis, with state-led negotiators reportedly balking at a $48 billion offer from major drug distributors and manufacturers, on top of $10 billion expected to flow from the bankruptcy of Purdue Pharma.

Defendants argue public nuisance law is improperly being applied to them over the legal sales of prescription drugs and that some states allowed the opioid crisis to expand by failing to implement anti-diversion methods including prescription monitoring programs to prevent patients from using multiple physicians to obtain drugs.

Lawsuits by New York and two of its counties are scheduled to be the first major showdown over these arguments. In a flurry of filings this year, opioid distributors and pharmacies say New York has failed to produce more than 1 million documents about its drug-control efforts that could answer “the critical question” of whether the defendants caused the alleged nuisance.

In a Feb. 14 letter to Justice Garguilo, they asked to adjourn the upcoming trial or, failing that, find that the state approved their opioid sales and bar plaintiffs from arguing they engaged in conduct that invalidated that approval.

Want to get notified whenever we write about U.S. Drug Enforcement Administration ?

Sign-up Next time we write about U.S. Drug Enforcement Administration, we'll email you a link to the story. You may edit your settings or unsubscribe at any time.