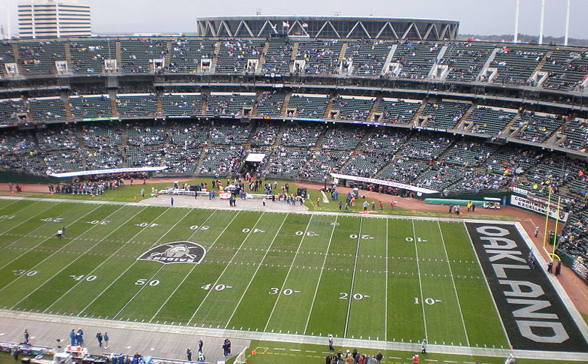 SAN FRANCISCO (Legal Newsline) – The NFL has filed a motion asking a federal court to dismiss a California city's amended complaint accusing the league and football clubs of essentially operating a cartel in defiance of anti-trust laws. The city has filed its own motion challenging the motion to dismiss.

In an action filed following the relocation of the Raiders to Las Vegas, the city of Oakland filed suit against the NFL and its clubs alleging it was harmed through lost municipal investments, lost tax revenues, lost rental income and by the diminished value of the storied Coliseum, of which the city is a part owner. These allegations are sufficient to afford it standing to bring the case, Oakland said.

Oral arguments on the motion to dismiss the first amended complaint - it was initially dismissed with leave to refile - are due to take place Friday, March 6, before Judge Joseph C. Spero of the U.S. District Court for the Northern District of California, San Francisco Division.

The action turns on whether Oakland has any standing to make a claim and whether the city was damaged by the actions of the NFL.

In its motion to dismiss, attorneys for the league described the filing as "louder and longer than its predecessor."

"But its basic claim – that the NFL should be compelled to admit additional clubs because one of those clubs might play in Oakland or the Raiders might have had no choice but to stay there – remains flawed at every level," the October motion states. "Oakland has failed to follow any of the steps laid out in this Court’s detailed roadmap of what allegations would be needed to survive a motion to dismiss."

The motion zeroes in on the antitrust claim that challenges the requirement that the NFL votes to admit new clubs.

"Oakland nowhere asserts that any new club has sought to join the NFL, much less that such a club wishes to play in Oakland," the motion states.

Also unsupported is the speculation that "some number of hypothetical new clubs might have played in Las Vegas and every market more attractive than Oakland, thereby foreclosing the Raiders’ move."

The motion noted that the district court has already found that "Oakland failed to sufficiently allege that defendants’ restraint on the supply of professional football teams resulted in any anti-competitive injury to Oakland."

In its December response to the motion, Oakland's attorneys stated that the league's arguments failed to even address the structure of the NFL and how it "uses its control over teams to constrain supply and drive hosting costs to supra-competitive levels."

Oakland was injured by this conduct, which the city, citing economists, claims amounts to “extortion," "sabotage" and "exploitation," the response states.

As a “closed” sports league, the NFL "artificially restricts the supply of teams to force cities to make a Hobson’s Choice: pay defendants’ anti-competitive price or lose your team."

The city argues "Defendants’ misconduct intentionally harmed a finite group of entities (Oakland, Alameda County and Las Vegas)....and Oakland is suing for damages directly caused to its proprietary interest as a host city."

Want to get notified whenever we write about NATIONAL FOOTBALL LEAGUE ?

Sign-up Next time we write about NATIONAL FOOTBALL LEAGUE, we'll email you a link to the story. You may edit your settings or unsubscribe at any time.