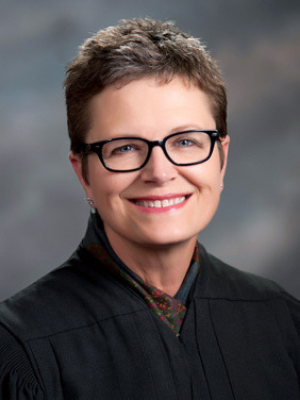 Justice Carol A. Beier of the Kansas Supreme Court

TOPEKA, Kan. (Legal Newsline) – The Kansas Supreme Court reversed a ruling in favor of the city of Overland Park in a family’s lawsuit against the city over allegations of negligence after agents with a bonds company forced themselves into the residents’ home.

JoeAnn and Eric Williams, along with JoeAnn Williams’ mother, Hazel S. Noble, and the Williams’ grandchildren sued C-U-Out Bail Bonds LLC, the city and Overland Park Police Department. The plaintiffs were all home when C-U-Out agents forced themselves into the home in search of the Williams’ daughter-in-law.

A lower court dismissed the city as a defendant and determined that the plaintiffs didn’t properly state a valid cause of action. The Court of Appeals affirmed the ruling. The Supreme Court reversed the ruling on Oct. 11.

“We conclude today that the plaintiffs’ amended petition alleged sufficient facts to support (a) potential intentional illegal conduct on the part of the bail bondsmen, (b) a police undertaking of a duty to investigate owed to the plaintiffs individual, and (c) no discretionary function immunity for the city under the Kansas Tort Claims Act (KTCA),” wrote Justice Carol A. Beier.

Beier pointed out the complexity of the case when she determined that the case goes beyond whether the C-U-Out agents simply acted illegally. The ruling states Kansas statutory law does not OK the type of behavior the agents participated in.

While the key provision on bondsmen does say that an agent can make an arrest and take them into custody, it doesn’t directly address an agent entering into a home. A second policy requires bondsmen to tell city or county police about an attempt to apprehend someone before they actually attempt to do it. The agent also has to issue a valid government-issued ID, written appointment of the agency (or the actual surety), and any other paperwork that relates to the agent or the person they are trying to apprehend.

“We cannot be certain at this point that C-U-Out complied with this provision,” wrote Beier.

The justice also noted that statements that said the agents talked to police officers while at the plaintiffs’ home could also prove that police weren’t aware of the agents’ attempt to apprehend the daughter-in-law at the Williams’ home. Beier added, “In short, the C-U-Out agents may have been acting lawfully or unlawfully.”

Considering this, the justice stated the appeals court moved too quickly when it ignored the plaintiffs' claim that the agents intentionally broke the law, and that the police officers were aware and overlooked it.

“We cannot say that the plaintiffs’ amended petition failed to state a claim upon which relief could be granted because it lacked allegations sufficient to demonstrate the existence of a duty owed to the plaintiffs and individually,” Beier wrote.

The ruling states the officers did indeed take on the responsibility of serving JoeAnn Williams when they responded to her 911 call and stayed at the home amid C-U-Out workers’ conduct. They spoke to an agent and at minimum started an investigation. But what the officers didn’t do, as alleged in the plaintiffs’ complaint, is complete the investigation and fulfill their duty of responsibility to the residents.

“Once the officers spoke to C-U-Out’s agent, they affirmatively undertook something beyond their mere public duty of responding to the 911 call," Beier wrote. "This duty could then be breached by an omission. … We hold that the dismissal on the ground that plaintiffs would never be able to show that the officers and the city owed them an individual duty was error.”

Ultimately, the complaint should not have been dismissed because of discretionary function immunity under the KTCA, the court found.

Want to get notified whenever we write about Kansas Supreme Court ?

Sign-up Next time we write about Kansas Supreme Court, we'll email you a link to the story. You may edit your settings or unsubscribe at any time.