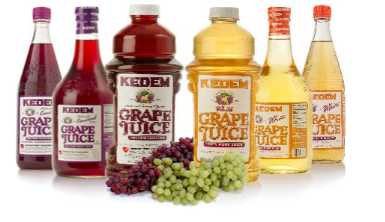 BROOKLYN, N.Y. (Legal Newsline) – A New York woman is suing a juice manufacturer over allegations that she was misled about the ingredients in grape juice.

Cynthia Weisberg, individually and on behalf of all others similarly situated, filed a complaint on Sept. 5 in the U.S. District Court for the Eastern District of New York against Royal Wine Corp., doing business as Kedem Food Products, alleging breach of express warranty, violation of the Magnuson-Moss Warranty Act and other counts.

The plaintiff purchased the defendants' Kedem 100 Percent Pure Grape Juice. She alleges despite the defendants' claims that the juice is pure, there is an additional ingredient, potassium metabisulfite, that is a synthetic preservative.

She alleges the defendants' representation that the product is "pure grape juice" is false and that by deceiving consumers about the nature of the juice, the defendants are able to charge a higher price.

"Surveys and other market research, including expert testimony plaintiff intends to introduce, will demonstrate that the term 'pure grape juice' is misleading to a reasonable consumer because the reasonable consumer believes that the term 'pure,' when used to describe goods such as the product, means that the goods are free from ingredients other than grape juice," the suit states.

"Defendants intended for consumers to rely on their representations, and reasonable consumers did in fact so rely. As a result of their false and misleading labeling and omissions of fact, defendants were and are able to sell the product to the general public throughout the United States and to realize sizeable profits."

The plaintiff is seeking trial by jury, punitive damages and injunctive relief. The plaintiff is represented by Joseph Lipari of The Sultzer Law Group PC in New York City.