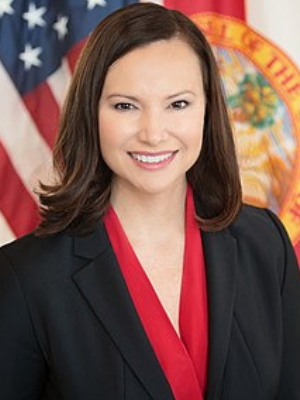 21st Century Oncology, which has facilities across Florida, the rest of the United States, and in Latin America, filed suit June 27 in the U.S. District Court for the Northern District of Florida, claiming the provision is unconstitutional.

The suit, which names Moody and Secretary of State Laurel Lee as defendants, asks for an immediate injunction against the officials and their offices from implementing a provision of House Bill 843 that outlaws "restrictive covenants" between doctors and their employers in certain circumstances.

Section 10 of the bill, signed into law by Gov. Ron DeSantis in late June, makes the non-compete agreements "void and unenforceable" when one company has a monopoly in a particular medical specialty in one county.

"Our office will be filing an opposition to that motion," Kylie Mason, the attorney general's press secretary, said. "As litigation is ongoing, we cannot comment further at this time."

In its motion for a temporary restraining order, preliminary and permanent injunction, 21st Century Oncology (21C), which recently emerged from bankruptcy protection, said it would be caused "irreparable harm" because of the provision voiding existing, legal and signed contracts between doctors and their employers.

The "restrictive covenants" formed "part of bargained-for consideration between physicians and their employers," the suit states.

"Such covenants are 'void and unenforceable' only in the instances in which certain limited and irrationally defined geographic parameters and other conditions are met," according to the suit. "Such restrictive covenants were intended to benefit the physicians, their employers, such as 21C, and their patients. Now as a result, 21C’s contractual rights are impaired, its patients are at risk, and its trade secrets protected by Florida law may lose their protection."

Following the signing into the law of the bill, the Sarasota Herald Tribune reported its genesis, which centered on four doctors who left company and were restricted from practicing in a certain area for one to three years.

They filed a lawsuit in federal court in March, but also hired a lobbyist to work the legislature, according to the newspaper. The single paragraph provision was added to the much larger bill addressing various issues related to health.

The report added that two of the doctors are children of Dr. Daniel Dosoretz, one of the founders of the company who left in 2017.

Representing 21st Century Oncology are attorneys from Gray Robinson PA in Tallahassee and from Akerman LLP in Jacksonville, Fort Lauderdale and Tallahassee.