The Office of the Comptroller of Currency (OCC), a unit of the Treasury Department, came to that conclusion while analyzing the Consumer Financial Protection Bureau’s rule last month. The rule has touched off a storm of congressional and legal actions to repeal it, as well as opposition from financial institutions. Critics charge it would open the door to more class-action lawsuits and hurt businesses.

The bureau previously reported it found no statistically significant evidence that ending mandatory arbitration in credit card agreements would lead to credit rate spikes. Both the bureau and the OCC interpreted the same data from a study by economist Alexei Alexandrov but came to different conclusions. 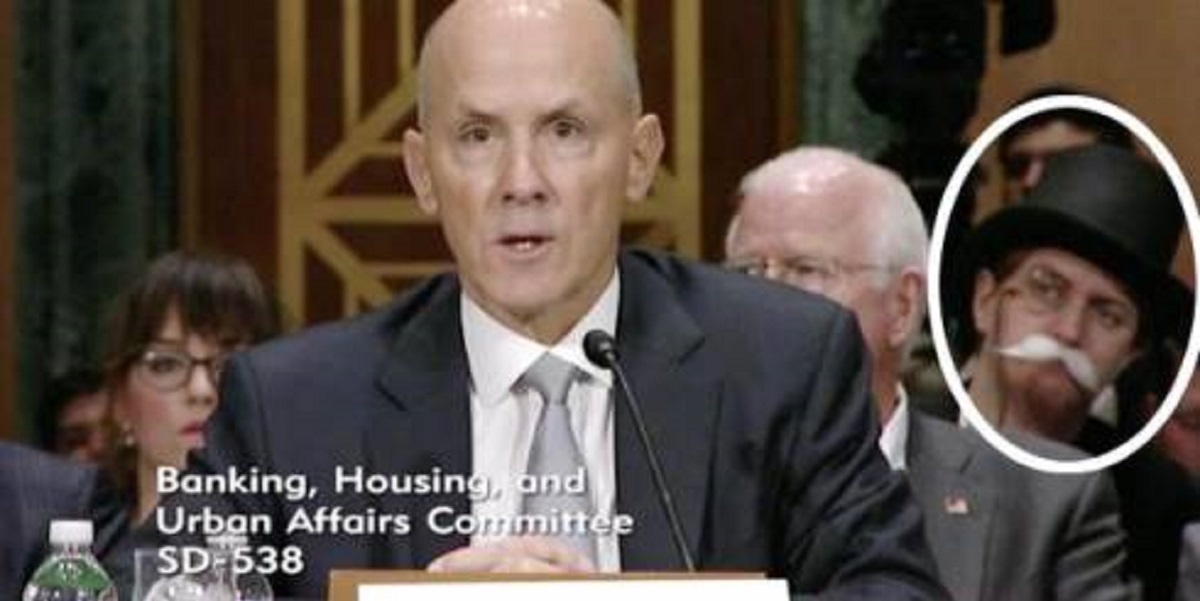 Former Equifax CEO Richard Smith is trolled by the "Monopoly man" during a Senate hearing on Wednesday. | Public Citizen

“The data, analysis and results reported by Alexandrov, and used by the CFPB, confirmed independently by the OCC, indicate a strong probability of a significant increase in the cost of credit cards as a result of eliminating mandatory arbitration clauses,” said the OCC report, which concluded that a 3.43 percent annual rate increase for customers was likely.

Keith Noreika, the acting comptroller of the currency, stressed the importance of his agency’s analysis last week at a conference at the University of Philadelphia.

“What we’ve found is that there could be as high as a three-and-one-half percent annual percentage increase for these consumers who would be subject to the rule,” Noreika said in a videotaped talk. “That’s like a 25 percent increase in credit costs for people who may live week to week.”

The report also laid out shortcomings in the Alexandrov analysis and noted that the economist was careful to say he could not be certain that the new rule would result in economically significant costs for consumers.

The American Bankers Association did not respond to a request for comment from Legal Newsline, but the group’s president and CEO, Rob Nichols, recently wrote in an op-ed that the arbitration rule is anti-consumer because it would result in a windfall for trial attorneys by increasing the number of class-action lawsuits involving consumer credit disputes.

Consumers who carry the day in arbitration disputes get 166 times what plaintiffs in class-action suits receive, rule opponents said. They also see arbitration as a faster method for consumers to gain financial relief.

The bankers group and other financial and business groups filed a lawsuit in U.S. District Court in the Northern District of Texas late last month against the CFPB rule. The rule is invalid because the structure of the CFPB, as set up by Congress, is unconstitutional, and the rule violates the federal Dodd-Frank Act because it is neither advantageous to consumer welfare nor the public interest, according to the court complaint.

Meanwhile, the House of Representatives has passed a bill that would overturn the CFPB rule, but a similar bill has yet to pass the Senate.

Public Citizen, a nonprofit group that has fought against what it says are major corporate abuses, sees forced arbitration as a tool used by companies such as Equifax and Wells Fargo to evade accountability in their business practices and bully consumers. This week Public Citizen sent an activist dressed as the “Monopoly man” from the iconic board game to generate publicity about the arbitration rule during a U.S. Senate hearing where former Equifax CEO Richard Smith was testifying.

“He’s trying a desperate hail Mary …” Werner said. “The vast majority of consumers support the rule. They’re throwing everything at the wall now to see what sticks.”

Congress has until the first or second week in November to repeal the rule, she said, and time is running out.

The fact that opponents have filed a lawsuit against the rule before the congressional appeal period is up suggests that they’re losing the battle, according to Werner, who also discounted the OCC analysis of how credit rates could rise if the rule takes effect.

“They interpreted it in a way that seems woefully inaccurate,” she said, adding that the 3.43 percent number that the OCC highlighted was not really significant.

When Congress banned forced arbitration in the home mortgage market through the Dodd-Frank Act, it resulted in no credit rate spike for consumers, Werner said. That real-life scenario would likely play out again if the CFPB rule goes into effect, she said.

In addition, politics may have played a role in the OCC’s recent analysis of the rule, according to Werner. “I think Noreika made it pretty clear that he has some partisan bias against the CFPB arbitration rule,” she said.