The U.S. District Court for the Western District of Wisconsin.

Last week, the John K. MacIver Institute for Public Policy filed its proposed class action in the U.S. District Court for the Western District of Wisconsin. The named defendants include Chisholm; Francis Schmitz, special prosecutor for the state Government Accountability Board; Bruce Landgraf and David Robles, both Milwaukee County assistant district attorneys; Kevin J. Kennedy, director and general counsel for the GAB; Jonathan Becker, administrator of the Ethics and Accountability Division of the GAB; and Shane Falk, staff attorney for the GAB. 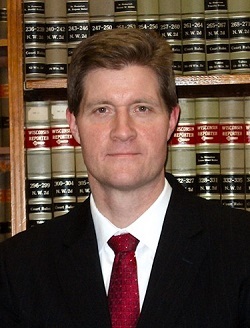 The GAB, charged with oversight of Wisconsin’s campaign finance, elections, ethics and lobbying laws, has since been dissolved.

In December, Walker signed 2015 Wisconsin Act 118, which did away with the board effective June 30 and replaced it with two separate commissions, with partisan appointees, to oversee the administration of elections and ethics. The change was prompted by the board’s involvement in Chisholm’s secret, or “John Doe,” investigation.

MacIver, a nonprofit institute formed in 2008 and dedicated to free markets and limited government, has been a backer of the conservative Republican Walker and much of his policies.

In 2011, the institute and Americans for Prosperity bought more than $500,000 worth of television ads in Wisconsin supporting the governor’s budget proposals, though they did not mention Walker by name in the ads, according to a Journal Sentinel report.

Now, MacIver claims Chisholm, his employees and some GAB staffers illegally seized the institute’s digital records during the criminal probe that alleged “illegal coordination” of campaign funding by Walker and 29 independent nonprofits, the institute included.

“This lawsuit does not challenge the basis or even the scope of John Doe I or John Doe II,” according to the institute’s 27-page complaint, filed Aug. 1. “Instead, it challenges the secretive and unlawful manner in which the Defendants conducted it.”

MacIver contends the defendants wanted to “amass as much politically sensitive material as possible, for as long as possible.”

“In their zeal, Defendants took affirmative steps to conceal their repeated use of nearly identical search warrants throughout the country,” the lawsuit alleges.

A whistleblower publicly alleged in 2014 that Chisholm's investigation was a result of his wife's hatred for Walker. Chisholm's wife, a teachers union steward, opposed Walker's 2011 effort to weaken public employee unions and require that members contribute to their own retirement and health care plans, said Michael Lutz, a former police officer.

Lutz was found dead in 2015, having apparently committed suicide.

As for the new lawsuit, the institute contends Chisholm and the other defendants secretly requested, obtained and catalogued millions of personal and politically sensitive emails, contact lists, calendar entries and associated records.

MacIver argues, in so doing, the defendants violated the Stored Communications Act, or SCA, which requires notice to be provided to the targets of an investigation when seizing their materials.

“Because of their secrecy, defendants denied us the opportunity to ask a court to review their seizures before the harm was done,” Brett Healy, president of the MacIver Institute, said in a statement.

Brian Fraley, a senior fellow at the institute, alleges the defendants seized “every email, contact, calendar entry and every document” in his account at MacIver -- all without notice or review by a court, he contends.

“The SCA exists to prevent exactly this kind of abuse and to protect individuals and groups from rogue agents like Chisholm and Kennedy,” Fraley said in a statement. “The law is ideologically neutral, as it should be.

“The fact that conservatives were the targets and victims here will bring no joy to liberals, for if agents of governments can ignore the law to target their ideological foes, no one is safe.”

Landgraf, an assistant district attorney in Chisholm’s office, told Legal Newsline in an email that they are “presently pending appointment of civil defense counsel.”

However, he said they are “routinely instructed” by their civil lawyers to decline comment.

MacIver, according to its complaint, seeks monetary damages on behalf of itself and others whose records were allegedly illegally seized, including costs, attorneys’ fees and punitive damages. It also wants the court to order the defendants to disclose exactly what records they seized and to prohibit them from disclosing the records or further violating the SCA.

“The defendants understood that they were required to provide notice to the targets of their digital dragnet before seizing the records,” explained Edward Greim, an attorney with Graves Garrett. “Instead, Chisholm and the other defendants intentionally avoided the requirements of federal law and the scrutiny of a proper court in order to build their database of political intelligence as quickly as possible.”

Last year, the Wisconsin Supreme Court put an end to Chisholm’s investigation, saying it was “utterly clear” that the special prosecutor, Schmitz, employed theories of law that “do not exist” in order to investigate citizens who were “wholly innocent.”

“In other words, the special prosecutor was the instigator of a ‘perfect storm’ of wrongs that was visited upon the innocent unnamed movants and those who dared to associate with them,” Justice Michael Gableman wrote for the 4-2 majority.

“It is fortunate, indeed, for every other citizen of this great State who is interested in the protection of fundamental liberties that the special prosecutor chose as his targets innocent citizens who had both the will and the means to fight the unlimited resources of an unjust prosecution.”

Soon after, Schmitz asked the state’s high court to reconsider its decision to close the investigation. But the court stuck with its July 2015 decision.

Now, the prosecutors are trying to get the U.S. Supreme Court to reopen the probe.

In a May order, the Supreme Court granted a motion by Chisholm to accept filings under seal and to release only redacted copies to the public. However, the nation’s highest court only takes up a small amount of cases each year and the court is down one justice due to the death of Justice Antonin Scalia.

But it’s not the first time the Supreme Court has been asked to get involved in the case.

In September 2014, the U.S. Court of Appeals for the Seventh Circuit reversed an injunction granted by U.S. District Judge Rudolph Randa that stopped Chisholm’s investigation into Walker.

Those targeted by Chisholm’s investigation then asked the full Seventh Circuit to rehear the case. But the court denied the en banc rehearing petition.

In January 2015, the group filed a petition for writ of certiorari with the Supreme Court. In May 2015, the nation’s high court declined to hear the case.

According to the docket, MacIver’s proposed class action has been randomly assigned to Chief Judge William M. Conley.