Mass. AG, told to 'f... off,' not commenting; Advocate calls her a thug

BOSTON (Legal Newsline) - Massachusetts Attorney General Maura Healey isn't publicly addressing the think tank founder who told her to "f... off" after she issued a subpoena seeking his group's communication with ExxonMobil regarding climate change.

Alex Epstein, founder of the for-profit advocacy group and think tank Center for Industrial Progress, earlier this month tweeted his email response to Healey's demand for info: "Re: your demand to seize my emails; F... off, fascist," though what he wrote was not edited.

"She is a fascist and I gave the response she deserved," Epstein told Legal Newsline in an email. 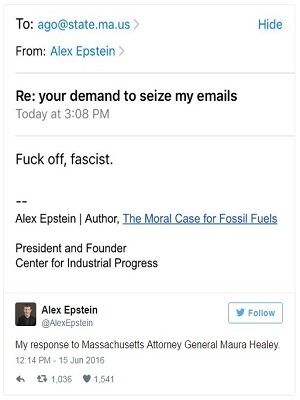 "I’m not responding to that thug, who calls herself an Attorney General, with a detailed response. Her actions make clear that this is not a civilized argument between us."

Healey's office declined a Legal Newsline request for further comment. In a widely reported statement released shortly after Exxon's moved to stop her investigation, Healey defended her office's investigation, which has drawn plenty of criticism..

“For many months, Exxon Mobil has engaged in an unprecedented effort to limit the ability of state attorneys general to investigate fraud and unfair business practices and to protect Massachusetts consumers, investors and the public,” Healey spokeswoman Cyndi Roy Gonzalez said. “Our investigation is based, not on speculation, but on inconsistencies about climate change in Exxon documents which have been made public. The First Amendment does not protect false and misleading statements in the marketplace. Exxon’s assertion that we cannot investigate it because the company has not engaged in business here in Massachusetts is completely preposterous and is a clear attempt to delay and distract from the real issues. We will continue to fight aggressively on the basis of our clear legal authority to obtain the information that we need to ensure the Massachusetts public is protected.”

Healey included the Center for Industrial Progress in an April 19 subpoena demanding four decades of communications between ExxonMobil and 11 other groups. Epstein found out about that when ExxonMobil released a copy of that subpoena earlier this month as part of its motion for an injunction, filed in federal court in Texas.

Epstein, author of The Moral Case for Fossil Fuels, released in 2014, responded to Healey's subpoena with the tweet heard 'round the climate change debate world: "Re: your demand to seize my emails; F... off, fascist."

ExxonMobil is suing Healey over her investigation into allegations the world energy giant lied about climate change in an effort to mislead the public and its own shareholders.

Exxon's complaint, filed earlier this month in U.S. District Court for the Northern District of Texas, claims Healey wants the documents "in the hope of finding some ammunition to enhance the Massachusetts Attorney General’s position in the policy debate concerning how to respond to climate change."

"Since at least 2012, climate change activists and plaintiffs' attorneys have contemplated different means of obtaining the confidential records of fossil fuel companies, including the use of law enforcement power to obtain records that otherwise would be beyond their grasp," Exxon's complaint says.

Healey's subpoena is being justified "with an allegation of fraud that ExxonMobil supposedly committed against consumers and shareholders by not sufficiently communicating the government's view of the dangers of CO2," Epstein said.

Epstein said he has no doubt why he is being targeted in this case.

"This is part of an orchestrated effort by several AGs, guided by the leadership of Al Gore, to harass political opponents on energy policy with the abuse of government power," he said.

That orchestrated effort is a clear violation of his constitutional rights, Epstein said.

"The fact that my organization, which is funded by no one (including ExxonMobil) was targeted reveals that the 'crime' being prosecuted is expressing opinions that government officials do not like," he said.

"I wrote a bestselling book called The Moral Case for Fossil Fuels, so the government may invade my privacy and, by the logic of its position, eventually throw me in jail."

On March 29, Healey joined with 16 other attorneys general at a press event in which all promised to use their offices to pursue fraud allegations against energy companies and those who deny climate change.

“In my view, there’s nothing we need to worry about more than climate change,” Healey said at that press event. “It’s incredibly serious when you think about the human and economic consequences.”

Epstein said he hasn't decided whether he will issue his own court challenge over the subpoena. He also said he hasn't been contacted by anyone in Healey's office but admitted he's not especially interested in speaking with them.

"The only contact I am interested in is the news that the suit has been withdrawn and that she and her colleagues have resigned for violating their oath to follow the US Constitution," he said.