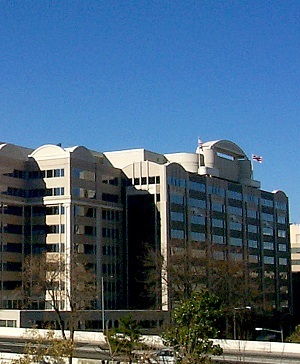 The FCC headquarters is located in a 10-story building called Portals II, located in Washington, D.C.

WASHINGTON (Legal Newsline) - Groups of petitioners and intervenors, among them pharmacy chain Rite Aid, satellite radio provider SiriusXM and the U.S. Chamber of Commerce, argue that an order by the Federal Communications Commission last year makes it impossible for callers to comply with a federal law targeting unwanted telephone solicitations.

In its omnibus ruling, filed July 10, 2015, the FCC resolved nearly two dozen requests for declaratory rulings and reaffirmed that the Telephone Consumer Protection Act “protects consumers’ right to choose which automated calls they wish to receive.”

The TCPA, passed by Congress and signed into law by President George H. W. Bush in 1991, restricts telephone solicitations, i.e. telemarketing, and the use of automated telephone equipment.

ACA International filed its petition for review with the U.S. Court of Appeals for the District of Columbia Circuit the same day the FCC released its 81-page declaratory ruling and order. Several other legal challenges followed, and later were consolidated with the D.C. Circuit.

The petitioners contend the FCC order interpreting the TCPA expanded the law beyond its intended meaning.

The FCC defended its ruling in its Jan. 15 response to the petitioners’ arguments and asked the D.C. Circuit to defer to its broad order, calling it a “reasonable exercise” of its authority.

“Consistent with the text of the statute, the Commission ruled that the TCPA’s autodialer restrictions apply to any device with the capacity to autodial telephone numbers, even when the device is not being used in this manner, and that the term ‘capacity’ can encompass both present and potential abilities,” the FCC wrote in its response.

“The Commission ruled that new consent is required to make automated calls to a wireless number after it has been reassigned to a new subscriber. Thus, except for a one-call safe harbor, callers cannot continue to rely on the consent of the previous subscriber.”

It also ruled that consumers who previously agreed to receive automated calls may later revoke their consent by any reasonable means, and that callers should not be allowed to unilaterally restrict consumers’ ability to revoke consent by designating their own exclusive revocation procedures and refusing to honor “other reasonable requests” to stop calling.

“The Commission exempted certain health care-related calls to wireless numbers that are made for purposes of health care treatment -- including prescription notifications, exam confirmations, and pre-operative instructions -- but declined to exempt calls made for other purposes, such as telemarketing, advertising, billing, or debt collection,” the FCC continued.

“Because the Commission’s resolution of each of these issues was a reasonable exercise of its delegated authority to interpret and administer the TCPA, the petitions for review should be denied.”

In a final joint reply filed Feb. 24, the petitioners, including ACA, SiriusXM, the Chamber and the Consumer Bankers Association, among others, argue the FCC’s position makes compliance “impracticable.”

“Under the Commission’s Order, any phone that has the capacity to store and dial numbers from a list is apparently an ‘autodialer,’ and any phone that could hypothetically be altered to do so has the requisite capacity,” the petitioners wrote. “That test likely subjects every uninvited call or text to a wireless number from almost any modern phone -- including smartphones -- to a $500 penalty.

“Respondents cannot bring themselves to disagree, saying only that smartphones are not ‘necessarily’ covered.”

They contend the commission has transformed what was a narrow provision targeting automated, random-and-sequential dialers into a universal ban on far more calls, from devices that “cannot even currently function that way.”

The petitioners argue the FCC’s order also makes it impossible for callers to comply with that ban by securing consent.

“Callers are strictly liable for calls unknowingly placed to reassigned numbers,” they explained. “But given the sheer number of reassignments and the near impossibility of sussing them out, such calls are admittedly unavoidable.

“And even if callers reach the right person, they still cannot trust the consent they have obtained.”

While the commission concluded that recipients may revoke consent through any “reasonable” means -- not just designated channels -- the petitioners argue that “choose-your-own-method-of-revocation regime” prevents callers from efficiently tracking and honoring revocations.

“All told, the Order ensures that callers cannot avoid liability when making legitimate calls that Congress allowed: ones made without an ATDS or with prior consent,” they wrote.

In a final joint reply filed March 1, the intervenors -- among them, the Council of American Survey Research Organizations, Marketing Research Association and National Association of Federal Credit Unions -- argue the FCC’s order “dramatically expands” the scope of the TCPA.

“The Order expands the scope of the TCPA in several ways, none of which accounts for the changes in conditions since the statute’s enactment or provides the clarity that businesses need,” they wrote.

“First, the Order expands the definition of ‘automatic telephone dialing system’ to include equipment that ‘lacks the present ability to dial randomly or sequentially’ but has the ‘potential’ or ‘capacity’ to provide those capabilities.”

The intervenors, like the petitioners, argue the FCC’s order wrongly defines “called party” for purposes of the prior express consent provision to include the “subscriber” or “customary user of the phone,” rather than the intended recipient of the call; and imposes strict liability for calls to reassigned wireless numbers following the first call to the new subscriber, “when a previous subscriber, not the current subscriber or customary user, provided the prior express consent on which the call is based.”

“Lastly, the Order also requires callers to accept revocation of consent ‘through any reasonable means,’ without defining what those means include, and precludes callers from defining those means in advance,” they wrote.

Petitioner Rite Aid, which filed a separate final reply with the D.C. Circuit Feb. 24, argues the FCC “mistakes” its challenge.

The company, it notes, is not seeking an exemption for “non-treatment telemarketing” calls -- “whatever that term may mean,” it added.

“It argues the Commission unlawfully bent a generic call statute to impose a confusing patchwork of regulations on health-care communications that are protected and promoted by federal law and policy to the detriment of providers, patients, and public health,” Rite Aid wrote in its brief.

The company added that the commission’s efforts to “prop up” its regulations on brief “fall short.”

Oral arguments in the case have yet to be scheduled.