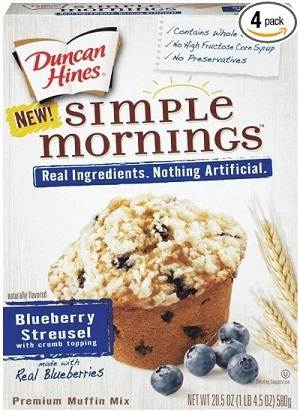 ST. LOUIS (Legal Newsline) - Last month, a Missouri woman filed a class action lawsuit in a state court, alleging the maker of a Duncan Hines-brand muffin mix lied to her, and potentially hundreds of others, about its ingredients.

About a month later, on Feb. 5, Pinnacle filed a notice to remove the lawsuit to the U.S. District Court for the Eastern District of Missouri, Eastern Division, citing the potential class size, among other things.

A week later, the company filed a motion in the federal court to dismiss the lawsuit all together.

“Plaintiff received exactly what she paid for: a muffin mix that contains the ingredients necessary to bake muffins, with all ingredients listed clearly on the label,” Pinnacle wrote in its motion Friday.

She argues the mix, despite its “nothing artificial” label, contains monocalcium phosphate and xanthan gum -- both of which, she contends, are artificial, synthetic substances.

Thornton, a St. Louis resident, purchased a mix on at least one occasion during the class period -- in the last five years -- at a local grocery store, for the price of $3.58.

“Knowing that consumers like Plaintiff are increasingly interested in purchasing healthy food products that do not contain potentially harmful artificial and synthetic ingredients, Defendant has sought to take advantage of this growing market by labeling certain products as containing ‘Nothing Artificial,’” the lawsuit states. “By affixing such a label to the packaging of the Mix, Defendant is able to entice consumers like Plaintiff to pay a premium for the product.”

According to Thornton’s complaint, monocalcium phosphate is an inorganic compound that is used as a fertilizer and a leavening agent. Xanthan gum, the complaint states, typically is used as a food-thickening agent, but also can be used to thicken oil drilling mud.

“Neither Plaintiff nor any reasonable consumer would know nor should know that monocalcium phosphate and xanthan gum are artificial, synthetic ingredients,” the lawsuit states.

Thornton contends the mix is worth less than represented.

“This is a case about whether a muffin mix is somehow ‘artificial’ because it features ingredients commonly used to make muffins,” the company wrote. “As listed on the federally-mandated package label, the Mix is leavened with traditional baking powder, which is comprised of baking soda and calcium salts like monocalcium phosphate. As bakers have done with baking powder for over 150 years, the ingredients react together to make the muffins rise when they are mixed and baked. Similarly, xanthan gum, a natural byproduct of fermentation that likewise is disclosed on the package label, is used to thicken the muffin mix.

“Plaintiff has not offered any plausible definition of ‘artificial,’ yet she somehow asserts that these two common leavening and thickening agents -- which have been used by bakers for decades -- do not qualify.”

Pinnacle argues Thornton fails to define “artificial” in her complaint, and ignores that the two ingredients at issue would “reasonably be expected” in a baking mix and that the package label discloses the ingredients.

“Federal and state courts in Missouri have dismissed similar complaints on these same grounds,” the company noted, adding that the plaintiff also does not plead facts showing any ascertainable loss resulting from her purchase.

Judge John A. Ross has been assigned the case.

Want to get notified whenever we write about Pinnacle Foods Group ?

Sign-up Next time we write about Pinnacle Foods Group, we'll email you a link to the story. You may edit your settings or unsubscribe at any time.