P.F. Chang’s argues that newest complaint in class action over its gluten-free menu ‘comes up short’ 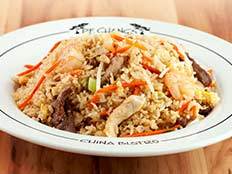 Phillips sued P.F. Chang’s in a California state court in December, and the defendant later removed the case to U.S. District Court for the Northern District of California.

The restaurant chain first moved to dismiss Phillips’ class action in February, claiming her celiac disease does not make her a disabled person under the Americans with Disabilities Act. It urged Judge Ronald Whyte to dismiss the suit before the entire restaurant industry was impacted.

Whyte heard oral arguments in May. According to the case’s docket, the motion to dismiss was “tentatively granted” at the hearing, with a final ruling to be issued by the court later.

In August, the federal judge granted P.F. Chang’s motion to dismiss Phillips’ original complaint. The court ruled that the plaintiff failed to allege facts showing that the restaurant chain discriminated against her and other guests with celiac disease or a gluten allergy/intolerance, by charging $1 more for some gluten-free menu items compared to non-gluten-free versions of menu items with a similar name but prepared and handled much differently.

However, Whyte granted Phillips a leave to amend.

In doing so, the judge expressed his “reservations” about whether the plaintiff could ever state a viable claim under her discrimination theory.

P.F. Chang’s, in its Sept. 24 motion to dismiss the first amended complaint, contends the new complaint asserts the same disability-discrimination claims and offers “few additional facts” and “none that warrant a different result.”

“The FAC remains devoid of any factual allegations suggesting how P.F. Chang’s gluten-free menu discriminates against those with celiac disease,” the restaurant wrote in its 28-page motion. “This is a case that should be dismissed at the pleading stage because it lacks a ‘cognizable legal theory.’”

The plaintiff asserts, P.F. Chang’s notes, that the gluten-free menu items are “essentially the same” and are “not truly different dishes” because they have the same basic ingredients.

“But the court has already rejected plaintiff’s argument that the gluten free and non-gluten-free items are the same, noting that plaintiff’s ‘complaint belies that assertion,’” P.F. Chang’s wrote in its motion.

“The point is that gluten-free and non gluten-free products are different -- both in ingredients used and in preparation. While there is no law regulating menu prices, the FAC itself demonstrates a need for both different ingredients and preparation methods which, in turn, supports different prices.”

Again, Phillips contends that the restaurant chain “discriminated against customers with celiac disease and gluten sensitivities by surcharging them for purchasing gluten-free menu items” and “took advantage of these disabled customers, who had no alternative but to purchase gluten-free items at the higher price because they medically are unable to tolerate items that contain or were exposed to gluten.”

P.F. Chang’s argues that the plaintiff dined at the restaurant of her own free will, that she was not coerced into eating there.

“She could have patronized any of the numerous other restaurants or grocery stores that offer gluten-free options,” the restaurant chain wrote, adding that Phillips has not alleged any difficulty ingesting, chewing or swallowing food.

“In granting leave to file the FAC, the court expressed ‘reservations’ that plaintiff could ever state a viable claim. The court’s doubts were well founded,” P.F. Chang’s wrote. “Plaintiff has taken her best shot and has come up short again. As such, it would be futile to allow further amendment.”

In an opposition filed Sept. 28, Phillips argues P.F. Chang’s motion to dismiss “largely regurgitates” the court’s order without giving “due consideration” to the “substantial” new allegations that address the court’s concerns.

“The First Amended Complaint shows that the modifications afforded to non-celiac customers are substantial and for some dietary preferences (e.g., nut allergies) generically similar to gluten-free modifications. Yet Defendant singles out celiac customers for unequal treatment,” the plaintiff wrote.

“Second, Plaintiff alleges a violation of the Unruh Act predicated on the Americans with Disabilities Act. By failing to modify menu items for free, Defendant fails to provide celiac customers with the same benefit it routinely affords to non-celiac customers.”

Phillips also charges that P.F. Chang’s created its gluten-free menu “expressly to surcharge” celiac customers rather than providing them with free modifications.

She points out that in her amended complaint she supplemented her factual allegations to show why celiac disease constitutes a disability and medical condition under Unruh -- a California civil rights law that specifically outlaws discrimination based on sex, race, color, religion, ancestry, national origin, age, disability, medical condition, marital status or sexual orientation.

“Because of the dire health consequences associated with consuming gluten, persons suffering from celiac disease must follow a strict and scrupulous dietary regimen that severely limits what, how, and where they can eat,” Phillips wrote in her 31-page opposition. “These dietary proscriptions make two major life activities -- eating and participating in an important act of social bonding -- difficult to achieve.”

A hearing to discuss P.F. Chang’s motion has been set for Friday morning.