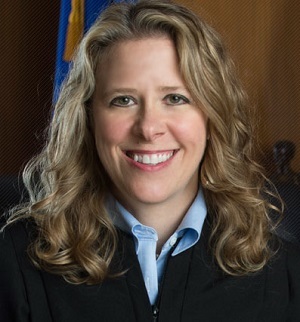 Walker made the announcement late Friday.

“Judge Bradley has truly lived up to her promise to be a judge that demonstrates unwavering commitment to the Constitution and the rule of law in every case that comes before her,” Walker said of the new justice.

Walker previously appointed Bradley to the Milwaukee County Circuit Court in 2012 and the state’s District I Court of Appeals in May.

Prior to her service on the Milwaukee bench, she worked for 16 years at the Milwaukee law firm of Whyte Hirschboeck Dudek SC, the Wisconsin offices of Hinshaw & Culbertson LLP and at the international software firm RedPrairie Corporation, where she served as in-house counsel.

Bradley said she was “deeply humbled” by Walker’s decision to appoint her.

“I look forward to immediately working with the state’s highest court to ensure that the rule of law remains paramount in all decisions made,” she said in a statement.

She added, “I remain steadfastly committed to running a positive campaign in the coming months to retain this seat and serve the people of Wisconsin.”

“I warmly welcome Judge Rebecca Bradley to the Wisconsin Supreme Court,” Roggensack said in a statement. “Her experience as a judge on both the circuit court and the court of appeals will assist her in making a smooth transition to the Supreme Court. I look forward to working with her as a colleague.

“I also am grateful to Gov. Walker for placing a high priority on the work of the court, and promptly making this appointment. The Wisconsin Constitution provides for seven justices, and we are best able to effectively and efficiently serve the people of Wisconsin when that constitutional directive is fulfilled.”

“The choice in this campaign could now not be clearer: Gov. Walker’s choice or the people’s choice,” Kloppenburg said in a statement. “I am running to be the people’s choice for Supreme Court. And I am asking the people of Wisconsin to stand with me in the coming election, for the integrity of our judicial system and against partisan politics and special interests on our court.”

Garren Randolph, a spokesman for Donald’s campaign, described Bradley as a “loyal ally” of Walker.

“What the people of Wisconsin want is truly independent judges. The public expects judges who don’t come to the bench with an ideological agenda, and who approach cases with an open mind,” he said in a statement. “Cases should be decided based on the facts, the application of law and under Constitutional principles. By appointing Rebecca Bradley to the circuit court, to the Court of Appeals and now to the Supreme Court, Gov. Scott Walker has now elevated a loyal ally three times in four years, including twice in the last year.

“This abbreviated process simply cannot withstand public scrutiny. Judge Rebecca Bradley’s unprecedented rise isn’t about her qualifications or experience. It is about moving an ideologue who headed the right-wing Federalist Society into a position to support a specific ideological agenda.”

Randolph said Bradley represents the “partisan politicization” of the state’s courts and “entire” system of government.

“Make no mistake, if Wisconsin wants a truly independent judiciary, we must reject Scott Walker’s politically partisan appointment and elect an independent judge like Joe Donald in April,” he said.

In a Twitter post Friday, the Democratic Party of Wisconsin, pointing to news of Bradley’s appointment, said Walker has destroyed “any possibility of a fair Supreme Court election next year.”

But Walker has insisted “there is precedent” for appointing state Supreme Court justices who may later run for a seat on the bench.

In a series of Twitter posts earlier this month, the governor pointed to Justice Janine Geske, who was appointed by then-Gov. Tommy Thompson in 1993. She faced voters in 1994 and was elected to a full term on the court. However, she resigned from the bench in 1998.

Walker also noted that Thompson also appointed Diane Sykes in 1999. She won election in 2000 and served until her appointment to the U.S. Court of Appeals for the Seventh Circuit in 2004.

Sykes defeated Louis B. Butler Jr. for her seat on the state Supreme Court. Butler was later appointed to the court by then-Gov. Jim Doyle in 2004.