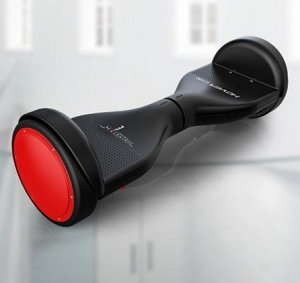 Pictured is the Hovertrax, made by Inventist.

WILMINGTON, Del. (Legal Newsline) - Last week, Segway Inc. filed a lawsuit against the maker of Solowheel and Hovertrax -- often, but incorrectly, referred to as hoverboards -- for illegally using its designs.

Segway Inc., along with DEKA Products Limited Partnership and Ninebot Technology Co. Ltd., filed its patent infringement lawsuit against Inventist Inc. in the U.S. District Court for the District of Delaware Friday.

New Hampshire-based Segway contends Inventist, which is headquartered in Washington state, is infringing on five of its patents:

- U.S. Patent No. 6,302,230, which discloses and claims a personal transporter with a balance monitor and a method for using such a transporter;

- U.S. Patent No. 6,651,763, which discloses and claims a personal transporter capable of “modulating its motion” to alert an operator to a specified condition;

- U.S. Patent No. 7,023,330, which discloses and claims an alarm system for a personal transporter that alerts an operator to a specified condition by modulating the motion of the transporter;

- U.S. Patent No. 7,275,607, which discloses and claims improved controllers for a transporter; and

- U.S. Patent No. 7,479,872, which discloses and claims an alarm system and a method for alerting the operator of a personal transporter to a specified condition by shaking the transporter.

Segway argues in its 18-page complaint that Inventist “has been and is now directly infringing” the patents by “making, using, selling, and/or offering for sale” and/or importing its hoverboards -- not quite the Back to the Future variety -- including but not limited to the Solowheel Classic, Solowheel Xtreme, Solowheel Orbit and Hovertrax products.

The plaintiffs are seeking:

- Judgment that Inventist has directly and indirectly infringed on their patents and that they are entitled to damages;

- An accounting, including a post-judgment accounting, to determine the damages to be awarded;

- That the case be deemed exceptional and that they are entitled to attorneys’ fees;

- That Inventist -- and its parents, subsidiaries, affiliates, successors and assigns -- be permanently enjoined from making, using, selling, offering for sale or importing any product or service falling within the scope of any claim of the five patents.

The case has been assigned to Judge Sue L. Robinson.

Inventist could not be reached for comment on the filing.