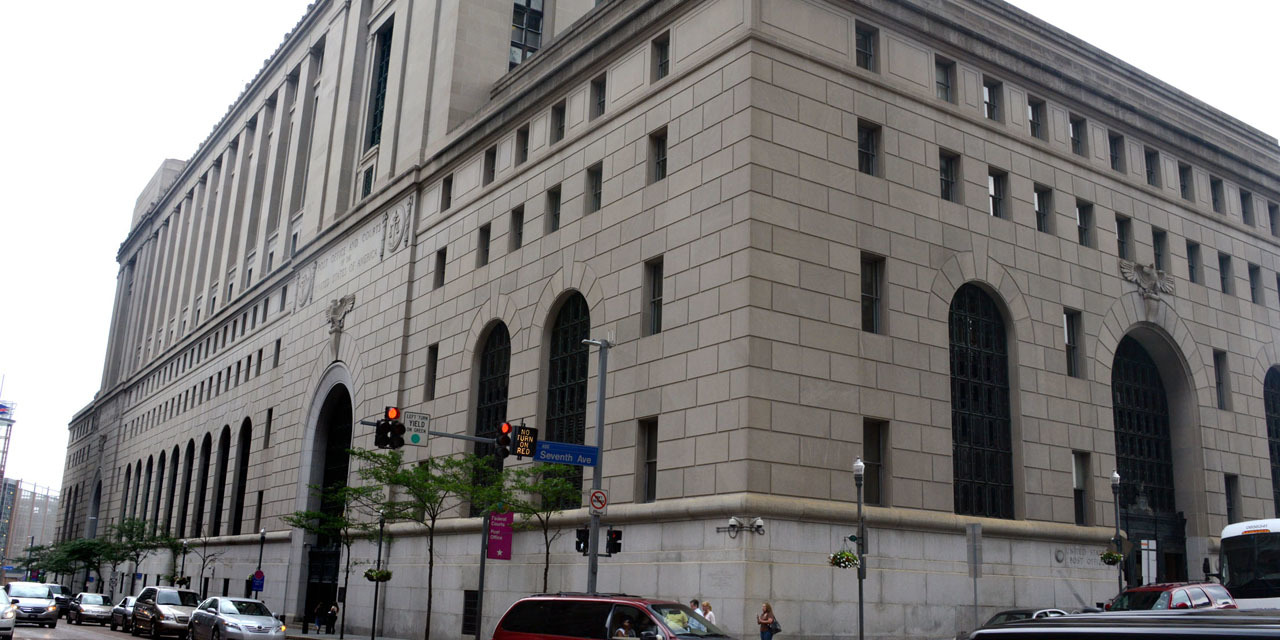 United States District Court of the Western District of Pennsylvania.

PHILADELPHIA (Legal Newsline) – Two law firms and eight individuals are filing the bulk of lawsuits that allege the premises of businesses in Pennsylvania are not in compliance with a federal disabilities law.

A search conducted by the Pennsylvania Record of non-employment lawsuits filed under the Americans with Disabilities Act revealed that eight individuals, represented by two different Pennsylvania firms, filed 61 percent of 290 cases in a two-and-a-half-year span that concluded at the end of 2014.

According to one such case, when Robert Jahoda arrived at the Galleria at Pittsburgh Mills in Tarentum in January 2014, he wanted to purchase some merchandise at the Littman Jewelers located in the mall.

While checking out, the legally blind Jahoda was unable to use the point-of-sale debit card device because he could not see the screen.

No accommodations were available to give Jahoda the same opportunity as non-disabled shoppers to use the device and not hand over his payment card to the store employees, granting them unwanted access to his banking information, the lawsuit says.

The situation is detailed in one of Jahoda’s complaints in the U.S. District Court for the Western District of Pennsylvania that alleges violations of Title III of the ADA.

Records show he has gone after several banks and credit unions for similar access issues at their ATMs.

What seems like a noble crusade usually ends with a murky result – a confidential settlement agreement that does not disclose whether the defending company or business has made the necessary adjustments to become ADA compliant.

"That's the real tragedy of these ADA access lawsuits," said Kim Stone, president of the Civil Justice Association of California. "A lot of public places do not have good access for disabled people, but these lawsuits are not improving the situation. It's just a system for extortion."

Between 2005 and 2013, California had more than 7,000 disability lawsuits filed, more than the next four states combined, including Florida, New York, Texas and Pennsylvania.

According to Stone, there is a minimum $4,000 of statutory damages in California for a Title III ADA violation, in addition to court costs and fees for which a losing defendant would become liable.

There would also be the additional costs a business would need to become compliant to ADA specifications. Again, that's if the case reaches the courtroom, which is not usually the case.

"The plaintiffs' bar figured out it was a pretty good deal," Stone said. "They would send a first demand letter, telling the business owner it had an ADA violation without detailing exactly where the infraction was. The business owner would pay anywhere between $5,000 and $10,000 to have them go away."

Provisions in a California bill effective Jan. 1, 2013, provided relief to small businesses. One of the major victories was requiring the filing of a civil complaint that specified the alleged violations and eliminated the first demand letter.

"A business can hire an architect and think they were compliant, but the standards are constantly evolving, and the state and federal codes don't always match," said Stone. "Regular people are trying to follow the law, but it becomes very complicated."

The amount of Title III ADA lawsuits in Pennsylvania has not reached the critical mass experienced in California or other jurisdictions like southern Florida, hence there are no similar bills proposed in the Pennsylvania General Assembly.

However, it's hard to ignore the growing trend in the federal docket. Between July 1, 2012 and Jan. 1, 2015, 290 ADA non-employment lawsuits were been filed in Pennsylvania District Courts.

Those 290 lawsuits nearly double what was filed in the previous 30-month period. Of those 150, Jahoda filed 20.

All totaled, Jahoda has filed 60 ADA lawsuits in Pennsylvania. Because the terms of each settlement are unclear, it is not known how much he has been paid.

The bulk of the major filers are represented by R. Bruce Carlson of Carlson Lynch in Pittsburgh and John Ward of Thomas B. Bacon in Royersford, Pa. Neither could be reached for comment.

According to one of his 21 complaints filed in Pennsylvania federal court, Darryl Garner has been legally blind since 2009, caused by his diabetes diagnosis. Like Jahoda, Garner has filed his suits in reaction to banks and credit unions having ATMs inaccessible for blind customers, with Carlson as his attorney.

In one case, Garner visited the Greater Delaware Valley Savings Bank in Broomall and found that the ATM was allegedly inaccessible for the blind. In particular, its voice-assistance program was not working and there were no Braille instructions, he says.

Although Owen Harty resides in Florida, he has been involved with at least 29 ADA violation cases in Pennsylvania. According to the complaints, he is paralyzed from the waist down and has found multiple instances of ADA discrimination at businesses such as Burger King in Havertown and Toys 'R' Us in Philadelphia.

Represented by Ward, Harty's complaints point out numerous alleged violations, starting with the amount of handicapped spaces in the parking lot and working his way inside the store. One of his more recent filings picks apart the Havertown Burger King, from the entrance way to the restrooms.

Oliver Hubbard suffers limited limb function and mobility caused by his cerebral palsy, according to one of nine cases filed in the federal court system. A Union County, N.J., resident, Hubbard frequenty visits family in the Greater Philadelphia region and has filed accessibility suits against businesses that allegedly do not accommodate for disabled guests.