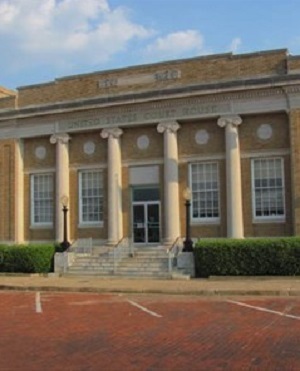 The Sam B. Hall Jr. Federal Building and U.S. Courthouse in Marshall, Texas.

Oberalis LLC filed 26 lawsuits on June 5 and another 25 on June 19. All were filed in the plaintiff-friendly U.S. District Court for the Eastern District of Texas, and have been assigned to Judge Rodney Gilstrap.

The nearly identical four-page complaints allege the companies are infringing on Oberalis’ U.S. Patent No. 5,911,140 titled “Method of Ordering Document Clusters Given Some Knowledge of User Interests.”

According to the complaints, the ‘140 patent was issued to Oberalis by the U.S. Patent and Trademark Office in June 1999.

It was originally filed by inventors John W. Tukey of Princeton, N.J., and Jan O. Pederson of Palo Alto, Calif., in December 1995 and then assigned to Xerox Corp., according to documents filed with the complaints.

The ‘140 patent relates to a method of document clustering, which has applications in automatic document organization, topic extraction and fast information retrieval or filtering.

Oberalis contends that the defendant companies are infringing on its patent through their websites.

The company’s attorneys -- listed on the complaints as Jaspal Hare, David Dyer and Bryan Haynes of Dallas law firm Scheef & Stone LLP -- could not immediately be reached for comment on the lawsuits.

The law firm helped another Texas-based non-practicing entity, Loramax LLC, file more than 50 lawsuits in the Eastern District of Texas in May.

In those lawsuits, Loramax also went after a number of large retailers, also alleging patent infringement by way of their websites.