Groups continue to rail against Innovation Act, which could be considered by House next week 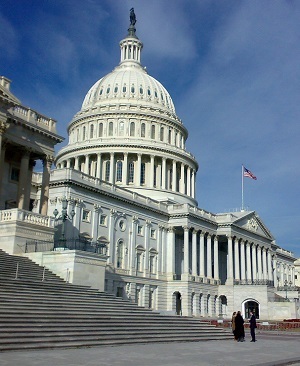 The U.S. Capitol in Washington, D.C.

WASHINGTON (Legal Newsline) - A coalition of universities, inventors, venture capitalists and small businesses continue to oppose House-introduced patent reform legislation, which could be considered by the House floor in the coming weeks.

The coalition argues that the legislation, re-introduced by U.S. Rep. Bob Goodlatte, R-Va., in February, should not be considered for floor action in the House in its current form.

“H.R. 9 would dramatically weaken intellectual property rights and undermine a patent system that is vital to incentivizing innovation and job creation in our country,” the groups said. “The bill also fails to adequately address abusive practices against legitimate patent owners.

The groups said they expect the House to take up the bill as early as next week.

Earlier this month, members of the House Judiciary Committee voted 24-8 in favor of H.R. 9 -- one of the more aggressive pieces of patent reform bills floating around Congress.

The June 11 vote came after what was described by some as a “marathon” markup of the legislation, in which 20 different amendments were proposed, including Goodlatte’s own manager’s amendment.

Among those notable changes made to the bill was a new provision that would crack down on “unreasonable” venue shopping by so-called patent “trolls.”

The panel, during the markup, called out the U.S. District Court for the Eastern District of Texas, which over the years has become a plaintiff-friendly venue for patent lawsuits.

Other adjustments to the legislation included a rewrite of a provision that would limit early discovery and adding language to make sure universities won’t have to pay trolls’ legal bills.

Some other tweaks were made to heightened pleading requirements and the bill’s customer stay provision.

Still, significant differences remain between the legislation and the Senate’s Protecting American Talent and Entrepreneurship Act -- in particular, a fee-shifting provision.

Lawmakers and stakeholders have said the Senate version, which also cleared its judiciary committee this month, is more balanced.

However, Bob Krause, a Democrat who is looking to challenge U.S. Sen. Chuck Grassley, R-Iowa and the lead sponsor of the PATENT Act, in 2016, argues that even that bill has the potential to hurt inventors, manufacturing companies and small independent entrepreneurs.

Krause is a small business owner and inventor -- he invented and patented a system for intermodal transportation at one point in his career -- and a former U.S. Department of Transportation official and colonel in the Army Reserve.

“Today, our patent system is faltering. A few misguided decisions by the courts and the ‘so-called’ America Invents Act of 2011 has made it a CEO’s fiduciary responsibility to steal patented inventions and massively commercialize them with no concern for patent rights,” he wrote in a column on IPWatchdog Sunday. “Weak patent rights create big problems for small time independent inventors, small businesses and investors.

“Today, the odds are that an inventor will lose his patent if he brings an infringement case against a large corporation. In today’s world of time-warp like speed between invention and obsolescence, no one knows what is patentable and what is not, and patent defense has become a multi-million dollar crapshoot stacked cruelly against inventors and small businesses.”

Large corporations, Krause contends, have taken advantage of problems created by weak patent rights and have used their “massive resources and excellent political connections” to do so.

“The so-called ‘patent troll’ fabrication is part of the script,” he wrote. “While there are lawyers that specialize in patent defense, there are specialists in many fields of law. Each requires a client that has a need for justice that falls in a specialized legal field.

“But now, for the first time in our history, inventors and their counsel are considered villains for defending hard-earned patent rights. Companies that steal patents from inventors are called our innovators. The innovation world has turned upside-down.”