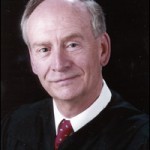 Justice N. Patrick Crooks, in a letter earlier this week to Judge James D. Peterson, for the U.S. District Court for the Western District of Wisconsin, argues that the situation at the court is “one of uncertainty and turmoil.”

Crooks sent his one-page letter to Peterson after fellow Justice Ann Walsh Bradley filed a 25-page affidavit in support of a preliminary injunction that would “maintain the status quo” with Justice Shirley Abrahamson still leading the state Supreme Court.

Last month, Wisconsin voters adopted a new constitutional amendment that changes the method by which the high court’s chief justice is selected.

Abrahamson, who held the title of chief justice since 1996, sued in the days following the statewide vote.

In her lawsuit, Abrahamson argues she will be “disrupted,” her interest in the office will be “impaired” and the votes of her supporters will be “diluted” if that should happen. She also argues that retroactive application of the new amendment raises “profound issues” of due process and equal protection.

Abrahamson served as the high court’s chief justice until late last month, when Justice Patience Roggensack was selected as the new head of the court.

Abrahamson, along with Crooks and Bradley, objected to the vote.

“If there is to be a transition of Chief Justice from Justice Shirley S. Abrahamson to Justice Patience D. Roggensack, there is need for a transitional plan,” Crooks wrote Peterson.

“I know that you are well aware of your authority to act based on your equitable powers. I respectfully request that you exercise such powers to set forth such a transitional plan, in order to address the chaotic situation that exists.”

In a court filing last week, state officials who are named defendants in the case asked Peterson to dismiss the lawsuit.