Federal lawmakers say PATENT Act, with some changes, has best chance of passing 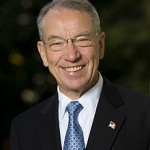 WASHINGTON (Legal Newsline) - A bill introduced last week by a bipartisan group of U.S. senators aimed at ending patent abuses still needs some tweaking, but lawmakers said Thursday the legislation, compared to other reform bills, has the best chance of passing.

Sens. Chuck Grassley, R-Iowa and chairman of the Senate Judiciary Committee; Patrick Leahy, D-Vt. and ranking member of the judiciary committee; John Cornyn, R-Texas and committee member; and Chuck Schumer, D-N.Y. and also a committee member, all are sponsors of the PATENT, or Protecting American Talent and Entrepreneurship, Act.

“Since the process started in the last Congress, we’ve engaged stakeholders that have been targeted by patent abuse. In addition, we’ve sought to be responsive to concerns raised by other industries and constituencies. Because of this, we’ve made significant progress,” Grassley said at a judiciary committee hearing held for the bill Thursday morning. “As I’ve maintained from day one, patent holders have a very legitimate right to enforce their patents against infringement. Our efforts must strike the right balance.

“As a result of these efforts, the PATENT Act has received a tremendously positive response.”

“Further, other stakeholders such as the associations representing higher education and universities, the Coalition for 21st Century Patent Reform and the Biotechnology Industry Organization have recognized our commitment to finding effective solutions that don’t produce unintended consequences or impinge upon the ability of good-faith actors to enforce their patent rights,” he said.

Though Grassley said he is “comfortable” with the bill’s current language, he said he also has been made aware of some concerns -- raised by patent holders -- about processes at the U.S. Patent and Trademark Office.

“They worry that administrative proceedings created by the America Invents Act -- the inter partes review (IPR) and post-grant review (PGR) proceedings -- are being abused and are stacked against patent holders,” he explained. “Other stakeholders, however, are of the view that these new proceedings have been very effective at weeding out weak patents.

“I’ve committed to looking at these concerns, determining whether they are valid or not, and working with my colleagues to see what can be done to improve this process.”

Leahy also emphasized the need to work with manufacturers, universities and other patent holders to ensure lawmakers “get the right balance.”

“It is worth highlighting some of the changes that have been made to the bill to respond to concerns raised by patent holders and others; changes which were personally important to me as we negotiated this legislation,” he said.

First, the language in the PATENT Act provides for fee shifting only in cases where the court finds that the losing party was not “objectively reasonable.”

“This is an important change from the approach of ‘presumptive loser pays’ contained in the House’s patent reform bill, the Innovation Act,” Leahy said. “It promotes judicial discretion and ensures the burden is on the party seeking fees to show that fees should be awarded.

“An additional exception allows the court to refrain from awarding fees if such an award would be unjust -- cases that, in my view, would include causing undue financial harm to an individual inventor or a public institution of higher education.”

Lettelleir told lawmakers that her company has been a defendant in 30 non-practicing entity, or NPE, lawsuits in the last six years and has had “as many as a dozen” active cases at any one time.

In addition, the retailer has and continues to receive threatening demand letters.

“None of these NPE lawsuits or demand letters relates to the items we sell; every claim relates to the technology we use to operate either the brick and mortar business or the ecommerce business,” she explained. “NPEs frequently seek tens of millions of dollars in damages in these cases.”

While JCPenney has a “storied history” as a driver and an early adopter of new technology and has provided many opportunities for smaller companies to pilot new technology, Lettelleir said the company can’t afford to do so anymore.

“Unfortunately, the cost to defend or settle abusive patent lawsuits has forced JCPenney to shy away from adopting technology offered by small inventors and small technology companies,” she said.

“JCPenney’s shift away from start-ups and small technology companies is driven by the risk and expense of abusive patent litigation.”

A member of the United for Patent Reform Coalition, JCPenney supports the PATENT Act, despite a few concerns.

“While we are especially concerned about implementing demand letter standards, heightened pleading standards and customer stay reform, JCPenney supports all the provisions contained in the PATENT Act,” Lettelleir said, adding that the company “fully supports” the ability of small individual inventors and legitimate patent holders to market their products and bring claims to property their IP.

The Obama administration said last week it is backing the legislation.

“As Secretary of Commerce, I strongly support targeted and balanced legislation that will strengthen our patent system while also ensuring the system works effectively to address abuses and inefficiencies -- just the sort of legislation that Senators Grassley, Leahy, Schumer, Cornyn, Hatch, Lee and Klobuchar have introduced today,” U.S. Secretary of Commerce Penny Pritzker said.

“Our country must protect one of its most valuable resources -- the ideas, intellectual property and cutting edge discoveries of our entrepreneurs and businesses.”

The New York Times’ editorial board also has come out in support of the bill, saying it “strikes a good balance and deserves approval.”

“Negotiations over a patent bill stalled in the Senate last year because some universities, technology companies, trial lawyers and pharmaceutical businesses asserted that the legislation would have gone too far in several ways, like imposing strict limits on when parties in a patent case can seek documents from the other side,” the newspaper wrote in an editorial published Wednesday.

“Lawmakers have learned from that failure and taken the legitimate concerns of patent holders into account.”

Want to get notified whenever we write about 3M ?

Sign-up Next time we write about 3M, we'll email you a link to the story. You may edit your settings or unsubscribe at any time.