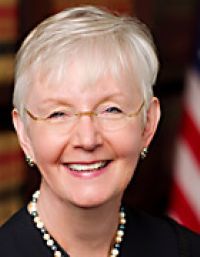 Illinois Supreme Court Justice Mary Jane Theis delivered the opinion of the unanimous court, which took the case on appeal from the Appellate Court for the Fifth District.

The plaintiff, Sue Carter, brought suit as the special administrator of the Estate of Joyce Gott, the decedent. The suit was brought in the Circuit Court of Marion County against Odin Operating Company, doing business as Odin Healthcare Center, in Odin, Ill.

Count one of the complaint alleged that Gott "sustained personal injury including gastrointestinal bleeding, anemia, and respiratory failure" due to the negligence of the nursing home prior to her death. In count two, Carter brought a claim for damages and injuries sustained by Gott's heirs resulting from Gott's wrongful death.

"By excluding all claims but those $200,000 and greater from the requirements of the arbitration agreement, the defendant essentially ensured that none of its claims against Joyce [Gott] would have to be arbitrated under the terms of the agreement. Instead, only Joyce's claims for personal injuries due to the defendant's improper or inadequate care would ever have to be arbitrated under the agreements."

The arbitration agreement contained provisions whereby the defendant would pay the arbitrators' fees, up to $5,000 of the plaintiff's legal fees, and the plaintiff could choose the venue.

"Based on these contract provisions," the court wrote, "we conclude that Gott's promise to arbitrate, even if not met with reciprocal promise to arbitrate by defendant, is nonetheless supported by consideration" and they held the arbitration agreements enforceable as to Count 1 negligence claims.

"Defendant does not dispute that plaintiff signed the agreement on behalf of Gott, and conceded at oral argument that nonsignatories to a contract are typically not bound," Theis wrote.

"As already discussed, a wrongful-death action does not accrue until death and is not brought for the benefit of the decedent's estate, but for the next of kin who are the true parties in interest. Plaintiff, as Gott's personal representative in the wrongful-death action, is merely a nominal party, effectively filing suit as a statutory trustee on behalf of the next of kin."

The case was remanded to the trial court for further proceedings regarding the negligence claims.

Want to get notified whenever we write about Illinois Supreme Court ?

Sign-up Next time we write about Illinois Supreme Court, we'll email you a link to the story. You may edit your settings or unsubscribe at any time.