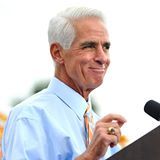 TALLAHASSEE, Fla. (Legal Newsline) - No matter what political banner he decides to run under, Charlie Crist, the Democratic candidate for Florida governor this time around, can count on trial lawyers pouring millions into his coffers.

Since the start of his political career as the Republican attorney general of Florida in 2003, trial lawyers and law firms have been among Crist's top supporters, accounting for more than $4 million in donations in state elections alone, campaign finance reports show.

Christ, the former Republican governor of Florida, flipped parties in 2012. He declared his intentions to seek the Democratic nomination for governor in November and has since netted more than $8 million in campaign contributions, according to the Florida Department of State.

His PAC, Charlie Crist for Florida, has raised more than $5.3 million and has been fueled by 89 individual contributions from attorneys and dozens of more donations made by in- and out-of-state law firms.

Among Crist's top contributors is the Mostyn Law Firm in Houston, accounting for $600,000 in total donations to his PAC.

Mostyn, one of the largest campaign donors in the state of Texas, made hundreds of millions in attorneys fees in the wake of Hurricane Ike by filing thousands of lawsuits against the Texas Windstorm Insurance Association - the lone provider of windstorm insurance for Texas gulf coast residents.

Other standout law firms with sizeable donations include:

-Since January, the Ferraro Law Firm, an asbestos firm in Miami, has made a total of $150,000 in campaign contributions to Crist's PAC;

-Personal injury attorney Sheldon Schlesinger and his firm Schlesinger Law Offices account for $50,000 in donations to Charlie Crist for Florida.

Large contributions to the PAC from individuals whose occupations are listed as attorney include:

Excluding his PAC, Crist has received more than $2.8 million in contributions in the 2014 election cycle, with around 20 attorneys donating to him directly, according to the Florida Department of State.

Crist needs every dollar he can get his hands on to defeat Gov. Rick Scott come November, according to his campaign manager Omar Khan.

"Building a grassroots organization that can take on Rick Scott's $100 million machine doesn't come cheap or easy - but together we're doing it one person, one conversation, and one dollar at a time," Omar blogged to supporters on Thursday.

Apparently, the Democratic Governors Association also thinks Crist needs every dollar he can get, as the organization donated $500,000 to his PAC on April 18, campaign finance records show.

On March 18, Juston Johnson, executive director of the Republican Party of Florida, filed a complaint with the state elections commission, alleging Crist got an illegal campaign contribution because his name and face were on billboards put up by the Morgan & Morgan law firm, according to Local10.com.