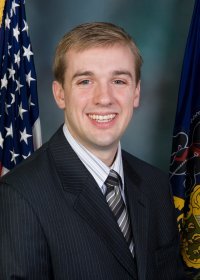 The bill, introduced by Reps. Bryan Cutler, R-Peach Bottom, and Brian Sims, D-Philadelphia, seeks to amend the state constitution so Commonwealth Court, Superior Court and state Supreme Court judges are chosen on merit rather than by state voters.

"I believe that it is time to have a conversation about how we select our judges," Cutler said.

"I personally believe that the integrity of our justice system requires that we select judges based on more than voter turnout, name ID or fundraising ability. I believe we should be looking for the members of the bar with the highest qualifications, not just the best political skills."

Cutler, who has pushed for the change in previous sessions, said merit selection would be a "hybrid" elective-appointive system.

Under the proposed bill, a constitutional amendment would establish an Appellate Court Nominating Commission made up of 15 members: six appointed by the governor (no more than half from one party, each member from a different county, must include two retired judges); eight by the General Assembly (chosen by the majority and minority leaders of both chambers); and one by the attorney general.

Registered lobbyists, elected or appointed officials, officers in any political party or organization, as well as staff and family members of the appointers, would be prohibited from serving.

The nominating commission then would review applicants' qualifications and recommend a short list to the governor for nomination.

After Senate confirmation, a judge would sit for a short term before standing for a non-partisan retention election.

"The people have shown year after year that most of them aren't that attached to electing judges -- the turnout in last week's election was below 10 percent in some counties, and only an estimated 14 to 17 percent statewide," Sims noted.

"It's time to remove partisan politics and campaign contributions from selecting our judiciary and implement a merit-based system for choosing Pennsylvania's statewide judges."

"Changing the way we select judges is important for the integrity of the courts and is what the people of this state deserve," said former Gov. Tom Ridge, a Republican.

"State lawmakers must do what is right for our judicial system. We can't allow time to continue to slip by with a system that needs to be fixed."

"A merit selection system with citizen participation will elevate the justice system in Pennsylvania and take it out of the political and fundraising environment," he said, noting he's been in favor of adopting such a system since his days as a district attorney.

Since the bill is a proposed state constitutional amendment, it must pass the legislature in two consecutive sessions and then go before the people in a public referendum.

"Judges must decide cases solely on the facts and the law, not based on political considerations, platforms or constituencies," said Lynn Marks, executive director of Pennsylvanians for Modern Courts.

"It just doesn't make sense to have a totally partisan process for a nonpartisan job. And the problem with money in judicial races is that most of the money comes from attorneys and special interests that often appear in state courts."