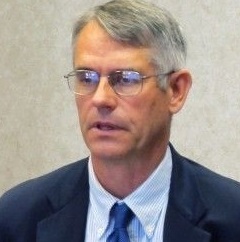 Michael replaces Greg Phillips, who was appointed to the U.S. Court of Appeals for the Tenth Circuit in January.

"Pete is an outstanding attorney, an outstanding individual and it has been a pleasure to work with him over the last two and a half years. I am pleased to have him as Wyoming's next attorney general," Mead said in a statement Wednesday.

Michael is a graduate of the University of Wyoming law school and received an undergraduate degree from Yale University.

He clerked for the Wyoming Supreme Court, was in private practice in Cheyenne for more than two decades and worked in the Wyoming Attorney General's Office for the last seven years.

"I am immensely excited about the opportunity to do this job. In Wyoming, this is a job that requires a lot of dexterity because Wyoming is a massive energy producer for the nation and world, while also dealing with the challenges other attorneys general around the rest of the country face," Michael said in a statement.

"I hope that I can live up to the standard set by Wyoming's previous attorneys general and do the quality of work that the people of Wyoming are entitled to."

Michael argued before the U.S. Supreme Court in 2011, defending Wyoming's water rights in a case brought by the state of Montana. That case is now going to trial in mid-October before a special master appointed by the Supreme Court.

Phillips was confirmed to the federal appeals court in July.

The U.S. Senate unanimously confirmed him to the Tenth Circuit in a 88-0 vote.

He will replace Judge Terrence L. O'Brien, who took senior status in April.