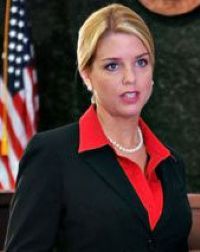 A spokeswoman for the attorney general confirmed that Bondi is seeking a second term, the Tampa Tribune reported Tuesday.

Bondi, a Republican, was a relative newcomer when she was elected as the state's top lawyer in 2010.

State Rep. Perry Thurston, the current Democratic Party leader in the Florida House, also is considering a run for attorney general next year.

Thurston, a Fort Lauderdale lawyer, told the South Florida Sun Sentinel last month that he is "actively thinking about" a bid.

According to the newspaper, he can't run for the House again because of term limits.

"We're still open to consideration of doing whatever's in the best interest of the Democratic Party of the state of Florida," Thurston told the newspaper. "If there's a more qualified candidate then I would support that candidate."

In the meantime, he has filed papers so he can raise money for a state Senate run in 2016.