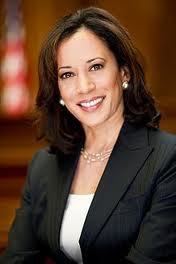 According to The Associated Press, Harris was promoting a piece of legislation Monday when she was asked about Obama's comments at a fundraiser earlier this month.

She wouldn't comment, only turning the topic back to the bill, which would provide permanent funding for a prescription drug tracking program, the AP reported.

According to a pool report written by Todd Gillman of the Dallas Morning News, the President introduced Harris and proceeded to make the unusual comment.

"He introduced California Attorney General Kamala Harris, a rising star in the Democratic party, and called her the 'best-looking attorney general' he's seen (after laughs, he said, 'It's true; come on.'). He also called her brilliant, dedicated and tough, and 'exactly what you want' in an AG."

Obama was in California fundraising for the Democratic National Committee. He was reportedly in Atherton, Calif., at the home of Levi Strauss heir John Goldman when he made the comments.

The President has since apologized to Harris.

"He called her to apologize for the distraction created by his comments," Carney said. "And they are old friends and good friends, and he did not want in any way to diminish the attorney general's professional accomplishments and her capabilities.

"I would note that he called her -- in those same comments -- 'brilliant,' 'dedicated' and 'tough,' and she is all those things."