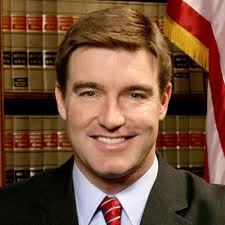 In a news release issued shortly after a press conference, Conway said his office filed the suit Wednesday in Franklin Circuit Court.

The privately-held electronic registry is designed to track servicing rights and ownership of mortgage loans in the United States.

Wednesday's lawsuit is a result of a months-long investigation of mortgage foreclosure issues in Kentucky by the Attorney General's Office.

In particular, Conway's lawsuit alleges that MERS violated state law by not recording mortgage assignments with county clerks when mortgages were sold or transferred from one bank to another.

By law, mortgage assignments must be recorded in the appropriate county clerk's office and a $12 fee is collected by the clerks on behalf of the Commonwealth.

"Kentucky's statute is clear. It requires assignments be recorded with county clerks, and MERS directly violated that law by creating this system that provides no public record of sales or transactions and deliberately circumvents paying recording fees to states," Conway explained.

"The process makes it difficult for consumers to access data to find out who owns their loans, and the Commonwealth is ripped off when it comes to recording fees."

MERS' corporate shareholders include, among others, Bank of America, Wells Fargo, Fannie Mae, Freddie Mac and the Mortgage Bankers Association.

According to Conway's office, currently more than 6,500 MERS members pay for access to the private system. More than 70 million mortgages have been registered on the system.

The attorney general's lawsuit alleges that since MERS' creation, members have avoided paying more than $2 billion in recording fees nationwide.

According to Conway's office, hundreds of thousands of Kentucky loans are registered in the MERS system.

As a result of not publicly recording the mortgage assignments and paying the required fees, the attorney general's suit also alleges that MERS violated Kentucky's Consumer Protection Act by committing unfair, false, misleading or deceptive conduct.

Under Kentucky law, MERS could be fined up to $2,000 for every violation.

"Before the bottom fell out of the housing market, banks were bundling and selling loans on the securities market as fast as the ink could dry on the paperwork. When homeowners had trouble paying their mortgages during the economic downturn, they struggled to find out who owned their loans. It made it difficult to find out who to call to request a loan modification or to defend the foreclosure.

"There is and was no public record of the transfers."

The suit also makes civil claims that MERS created this system to unjustly enrich and pad its bottom line at the expense of consumers and the Commonwealth of Kentucky.

MERS said in a statement late Wednesday that there is "no merit" to the allegations leveled by Conway.

"All MERS mortgages are registered in the local land records and all recording fees are properly paid. The MERS® System's role in the mortgage industry has reduced chain of title issues, provided efficiencies through e-commerce, and resulted in lower mortgage borrowing costs. Our business model is straightforward and transparent, and MERS role is clearly spelled out in the contract between borrower and lender. MERS® System data is not used by servicers to make loan modification, refinance or foreclosure decisions."

"MERS' standing as mortgagee has been upheld in re Jessup, No. 09-5229 (Bankr. E.D. KY 2010). MERS and CitiMortgage's Motion for Summary Judgment was granted and the court held that 'the language in the Lender's own instrument is sufficient to identify MERS as [the mortgagee],'" according to the registry's statement.

Other states have filed similar lawsuits against MERS, including Massachusetts, Delaware and New York. However, the Massachusetts suit has been dismissed and the Delaware case settled.

"The banks created this system as an end-run around the public property system and state recording fees. In Kentucky, New York and across the country, these actions have left financially troubled homeowners in the dark about who owns their mortgages, making the difficult process of negotiating a modification or fighting a foreclosure action even harder.

"Attorney General Conway's lawsuit is an important step towards accountability for these abusive practices."

To view a copy of Conway's complaint, click here.