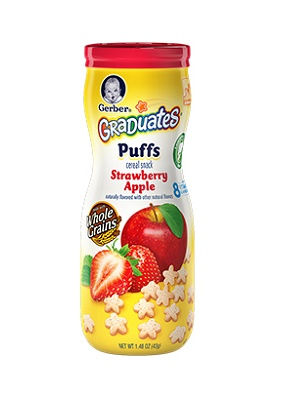 Nestle is being sued for allegedly falsely advertising the nutritional ingredients on its Gerber child food brand. | Gerber

SAN FRANCISCO (Legal Newsline) - Nestle is being sued for allegedly falsely advertising the nutritional ingredients on one of its child food brands.

Michell Gyorke-Takatri and Katie Silver filed the lawsuit in California Superior Court against the major food company over its Gerber Graduates Puffs. The defendant removed the case in August to U.S. District Court for the Northern District of California.

The lawsuit claims the company labels the product as though it contains a significant amount of fruits and vegetables because they are “vibrantly" depicted on the packaging.

The lawsuit said one of the powders was a dried apple puree, and added there was less than one gram of the powder in each serving of the puffs.

The plaintiffs are seeking class status for those who purchased the Gerber products in California over the last four years. They are also seeking an unspecified amount in damages.

The plaintiffs are represented by Matthew J. Zevin of Stanley Law Group in San Diego; Stephen Gardner, Amanda Howell and Scott Kitner of the same law firm in Dallas; and John Roddy and Elizabeth Ryan of Bailey & Glasser LLP in Boston.